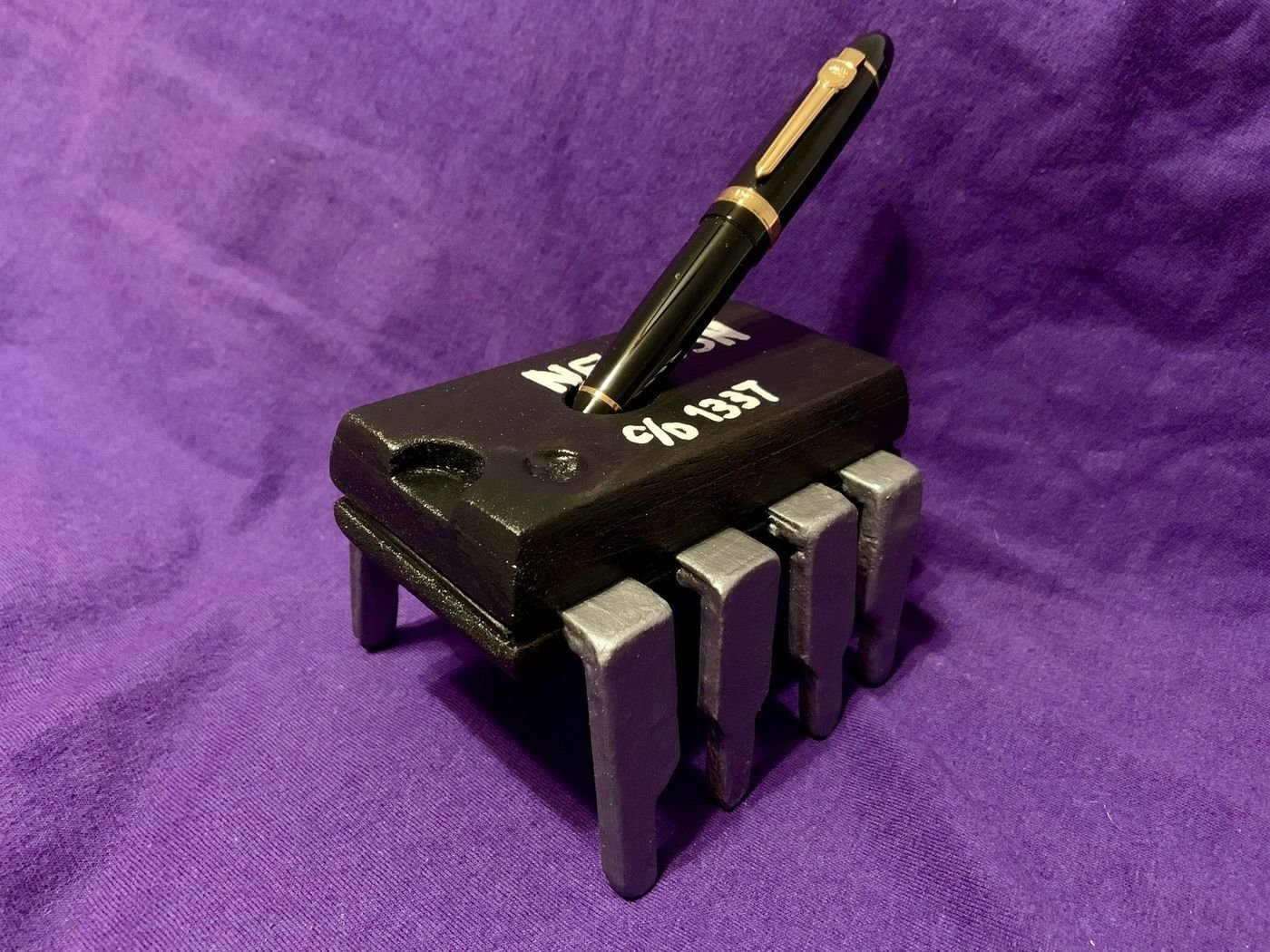 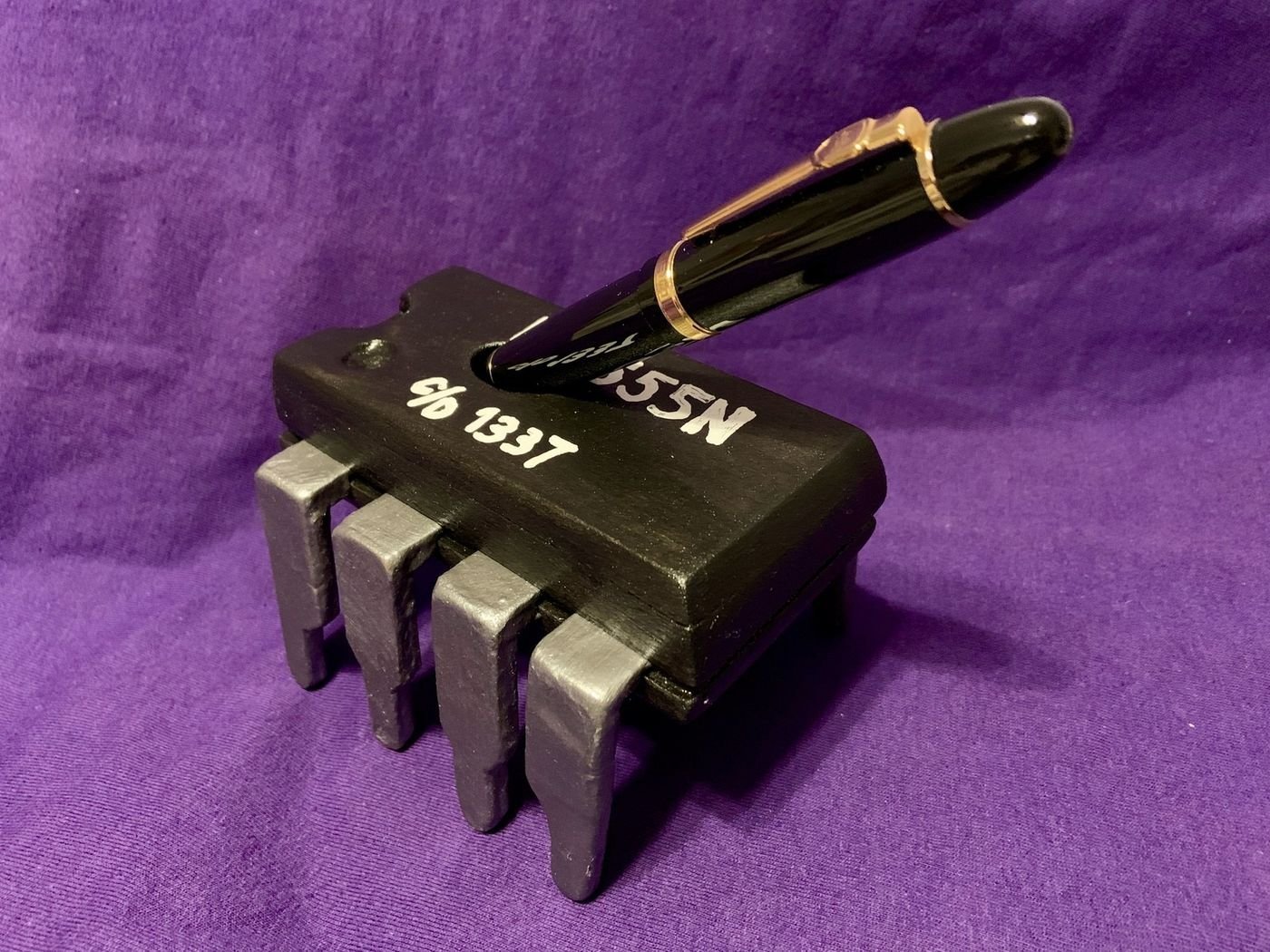 Fountain pens are made to be used. Unless they are to be collected, but that's a different story...

If your fountain pen is stored in a case or hidden away from view, there is more chance of reaching for that *gasp*...ballpoint pen laying around. You should have your everyday writer or a selection at the ready to get full enjoyment and use out of fountain pens.

Make this fountain pen holder to display your fountain pen. It makes it easily accessible when you need to jot down something important or just need to doodle a smiley face. And keep a nice assortment of fountain pen friendly stationery nearby. 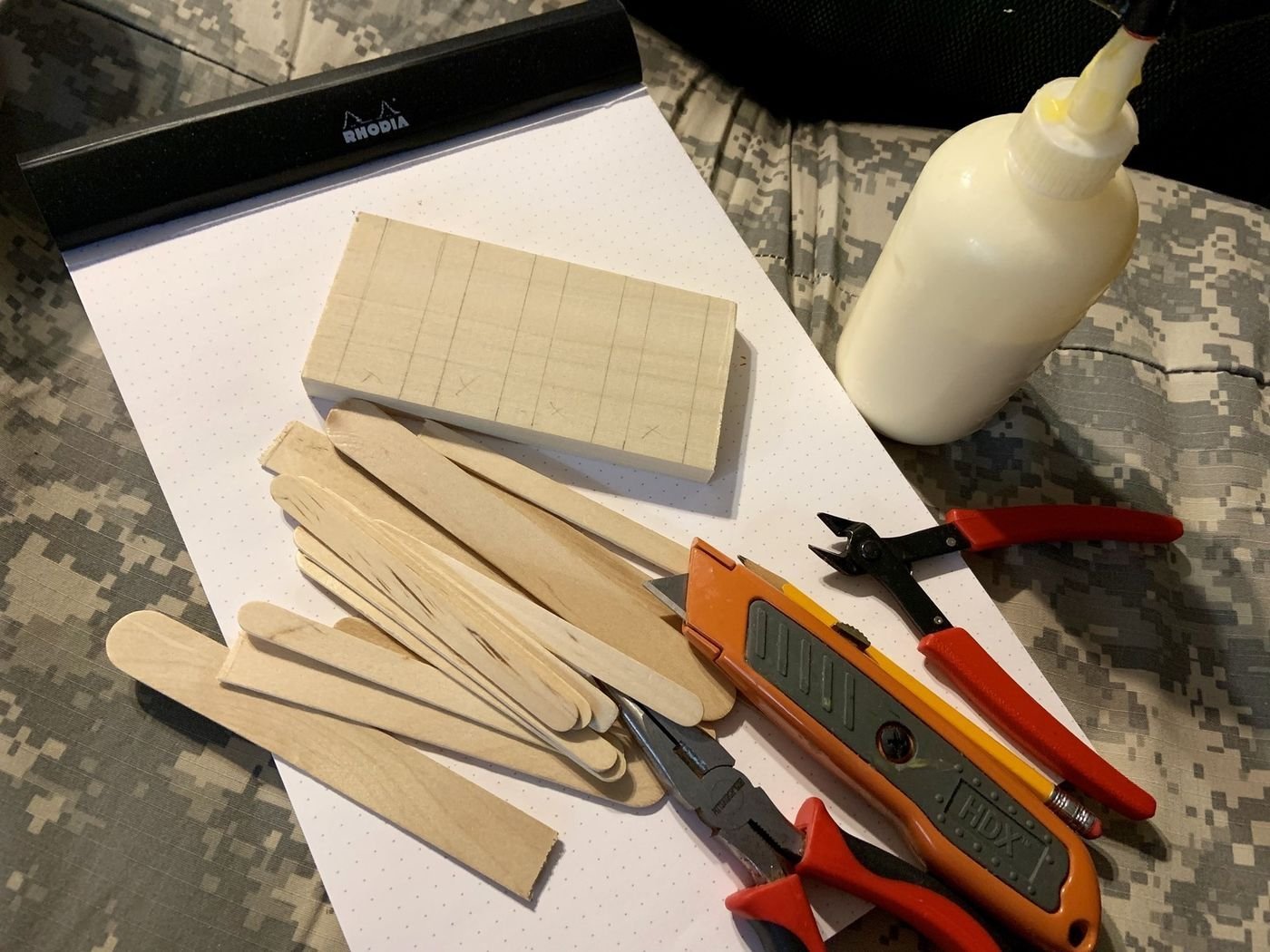 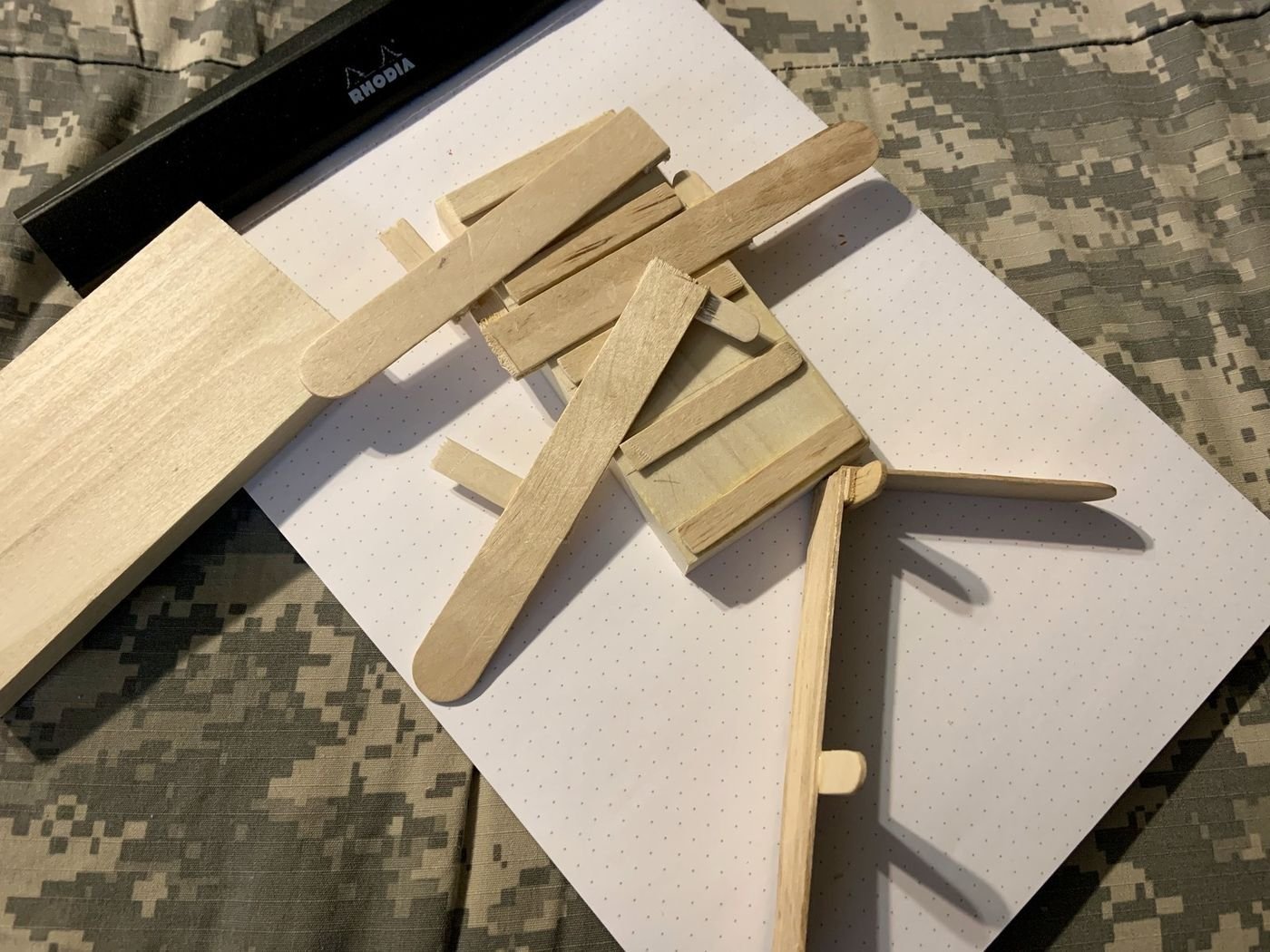 No bones about it. Once you get hooked on fountain pens, there's no turning back.

To make this fountain pen holder, themed for an "electronics enthusiast", all you need is some bits of wood, glue, paint and some basic tools.

The pen holder is a mini or is that giant 555 timer chip. It will be made entirely of wood, even the pin legs that represent the metal wire leads that come out of the chip.

Since this is a small desk accessory, we will be using 1/2" x 3" and 1/4" x 3" stock (really smaller because it is milled down and dried from the raw wood size). This is the smaller lumber for craft projects.

Having a box of wide and thin popsicle sticks(craft sticks/tongue depressors) is handy to use for building up the pin legs of the IC chip.

The full size of the chip was determined by marking out the spacing for the 4 pin legs on each side. A thin popsicle stick acts as a spacer for the wide popsicle stick pin legs.

The pin legs were then fabricated from layers of popsicle sticks glued together and cut to shape.

To quickly cut the popsicle sticks, I used a utility knife to score the cutline and snapped one part off with pliers grabbing along the cutline. I could do further trimming with a pair of wire flush cutters by snipping or nipping. Because the popsicle stick wood is brittle, fragments may fly off when you cut them with the flush cutters, be careful. The direction is random too, even if you try to cut it facing down into a tray hoping to catch the bits.

In making the pin legs, I should have made some kind of template or building jig to keep the pin legs splayed at the same angle for each piece. Even though I used a good carpenter's wood glue with fast tack, manipulating the tiny pieces to glue together in position required a lot of repositioning.

The completed pin legs were coated with glue to give it a smooth surface for a better metallic look when painted. 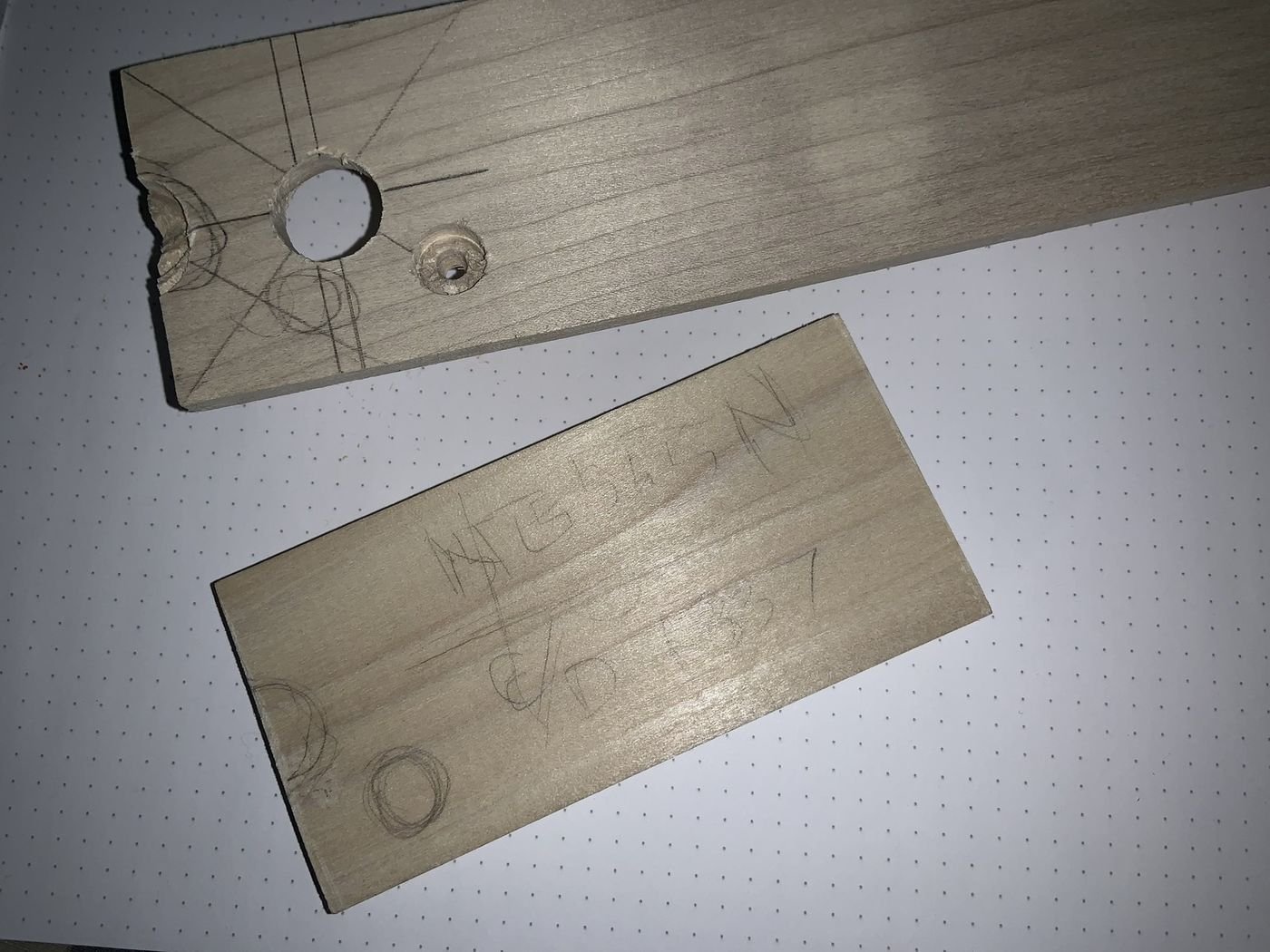 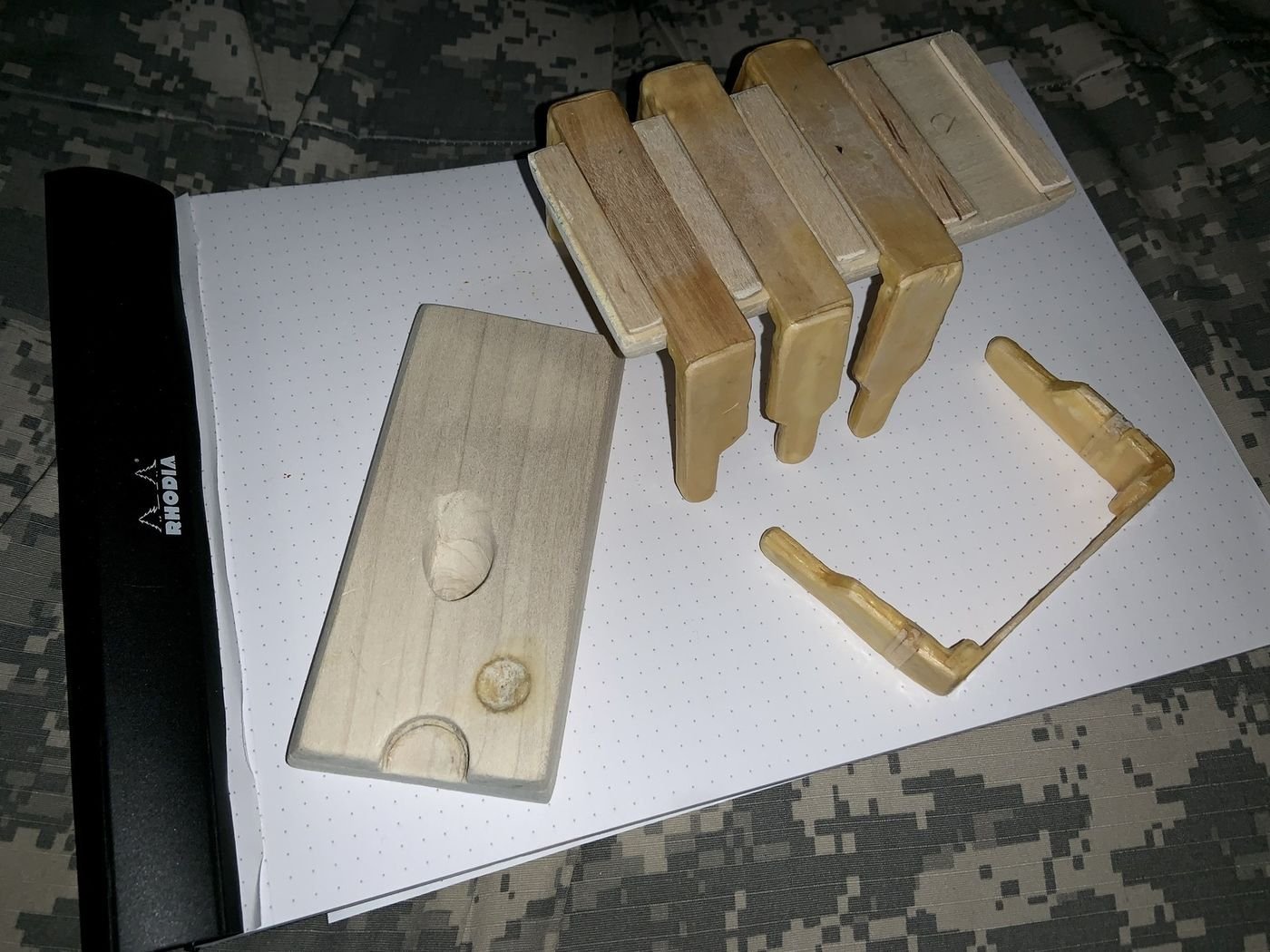 I needed to build up the thickness of the upper part of the chip to make it look anatomically correct. There is also an indentation and a marker dot to tell which is pin number 1 used in reference to the datasheet or specifications on how to use the chip.

I had 1/4" thick stock the same width of the body of the chip.

The easiest way to get the look of the indentation is to drill out a hole instead of trying to cut a semi-circle out with a coping saw or router. I used a 1/2" spade bit. You can see where I tried to drill the hole previously on the end. I had another separate piece butted up against the end to support the bit but trying to do this with a drill-driver is best left to using a drill press and more secure clamping.

The marker dot was drilled partway through the board with a 3/8" bit. I didn't have the forstner bits handy to drill a more flat-bottomed hole. I used the regular brad point drill bit and added some glue which evened out the bottom of the hole.

The capping piece was glued to the top body piece.

I guess if I planned this all out, you could have the chip body have some sort of secret compartment, spare nib, cartridges...

I also drilled a 1/4" pilot hole at about 45 degrees angle to be the pen holder hole which goes through the entire top piece. I just eyeballed it angling the drill held up against a framing square. Since this pen holder is for one of my bigger fountain pens — well, the biggest one I have — a Jinhao 159, the hole needed to be enlarged to fit the pen. Again, this might be wonky without a drill press but I took it slow with a 5/8" spade bit. Test to see if it fits and will hold the pen. You might need to have a deeper hole if the pen is not supported enough. Drill deeper after it is all assembled because you will probably need to cut through the pin legs when they are in position.

Both the top and bottom piece were chamfered all around. There is a slight angle on the walls of the device, probably to facilitate demolding of the plastic encasement. I just drew a line 1/8" border and rasped and sanded my way from the other edge to form the slope. 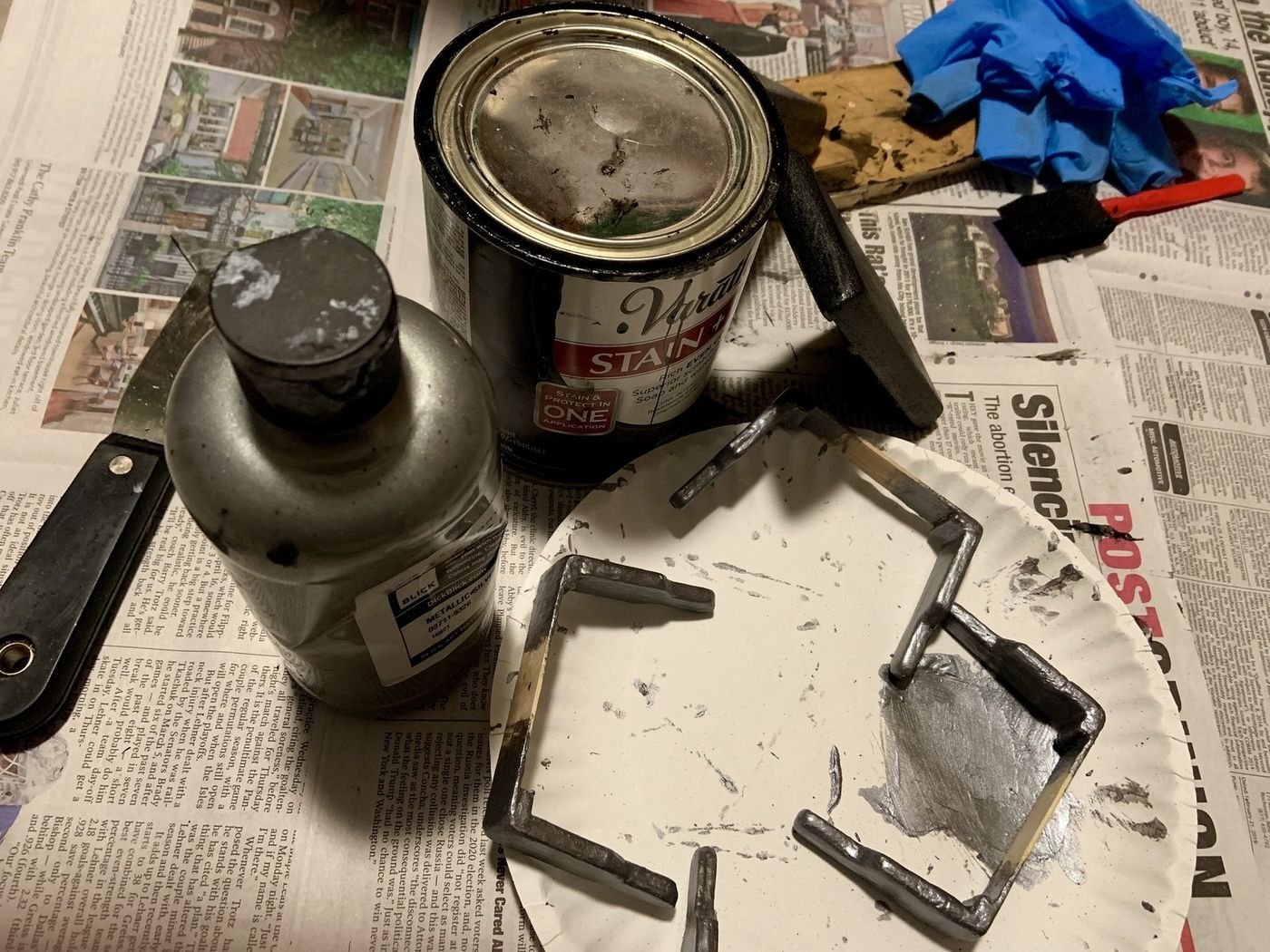 You don't need to brush up on your penmanship for this part.

I used a black stain/poly to finish the main body of the IC chip.

Feathering: Make it so

Since this is water based, I had to give it multiple coats to even out the dark color. Sand lightly between coats to knock down any raised grain. Remove sanding dust.

The pin legs were painted with a silver acrylic paint. That also needed a few coats to even out the metallic color and one to prime the slick glue layer.

Submitted for Your Approval 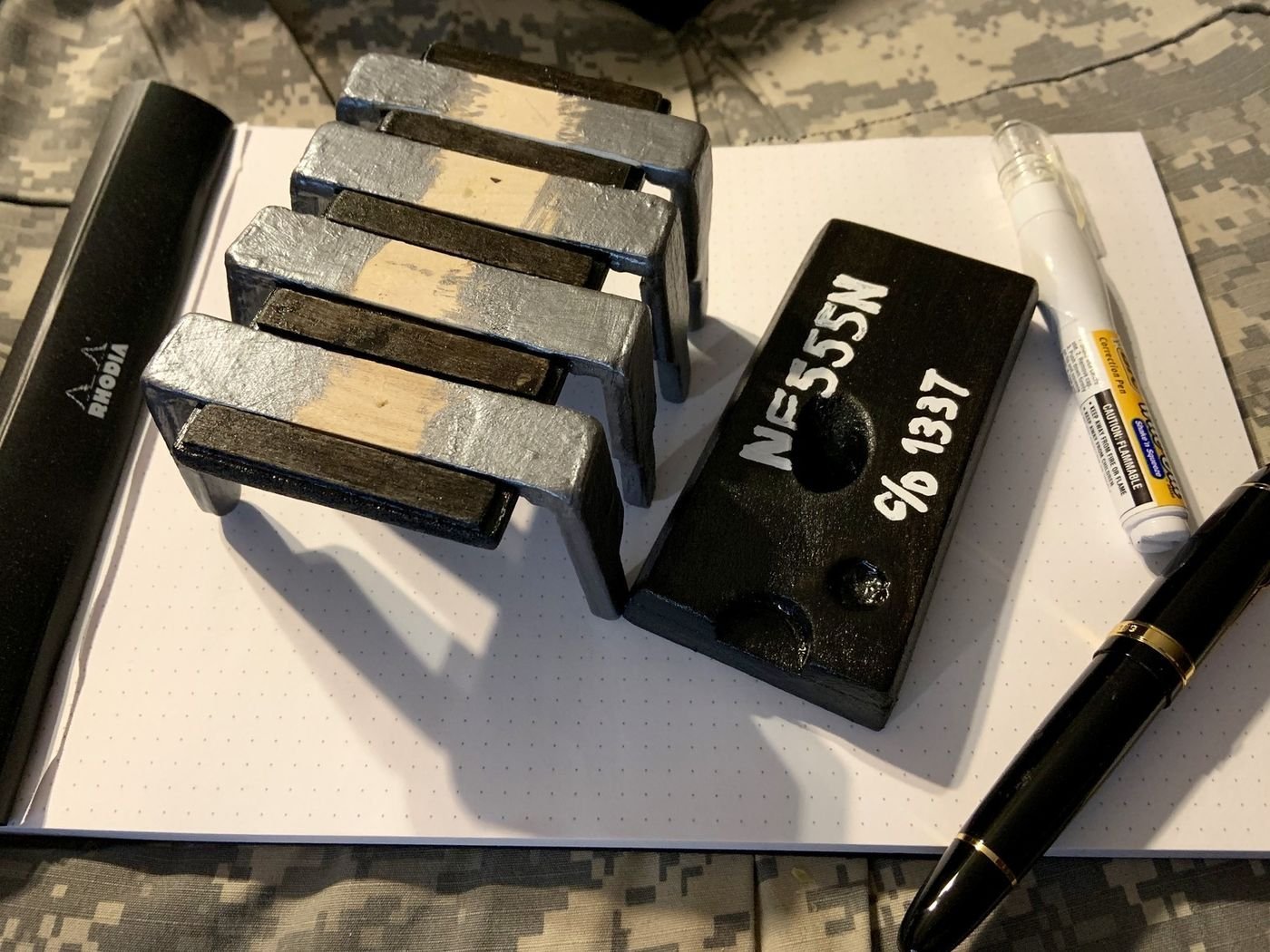 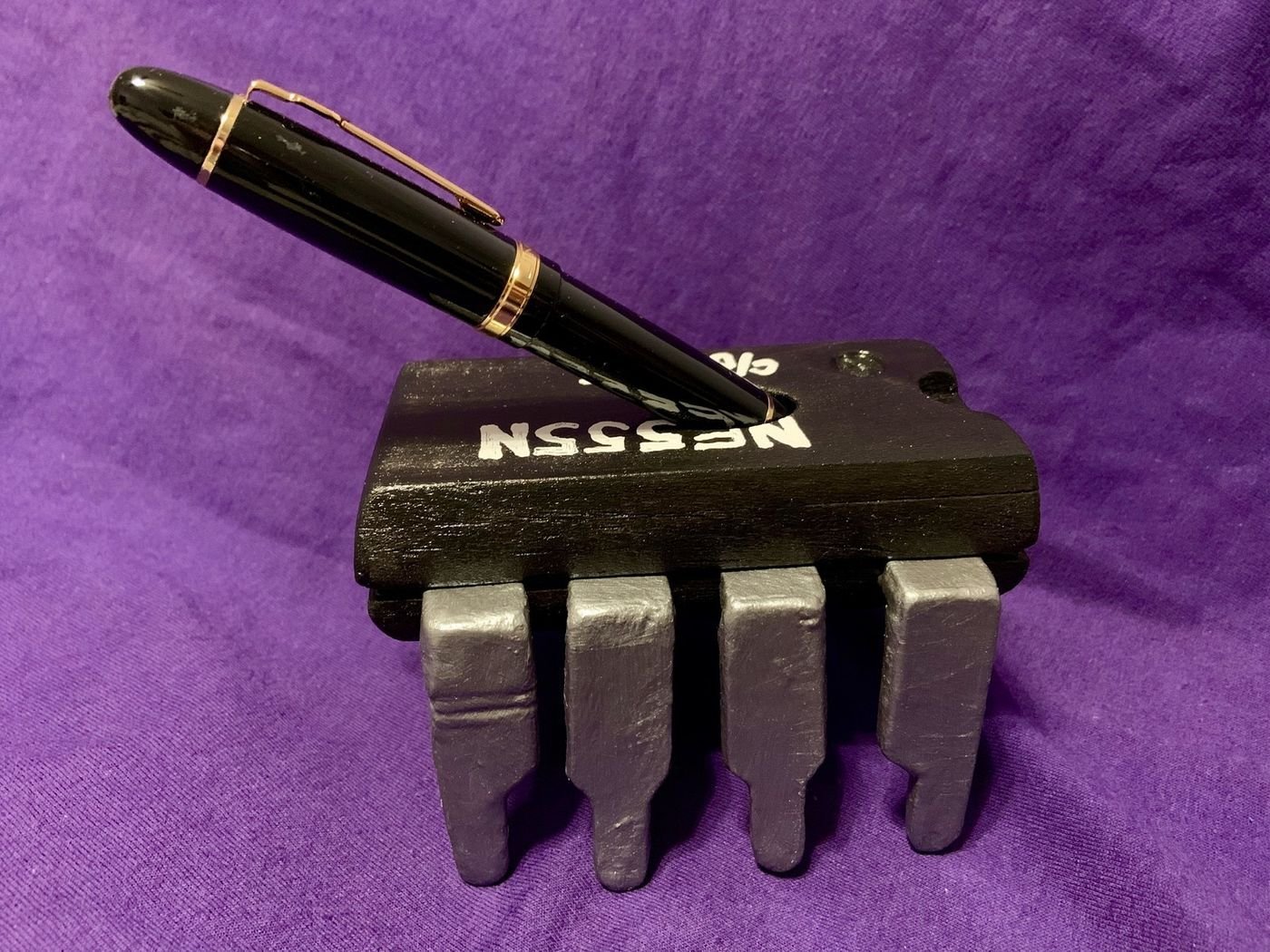 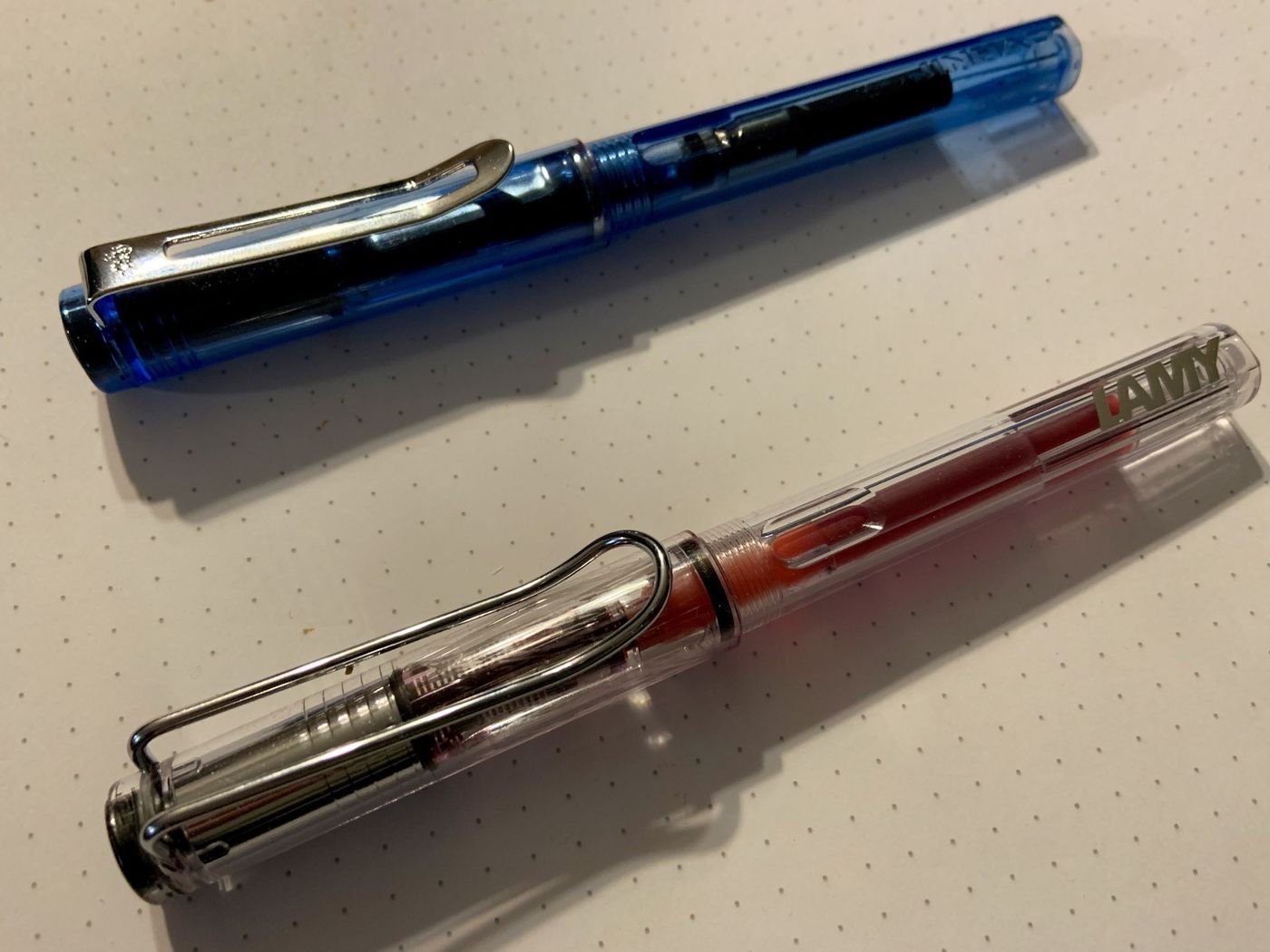 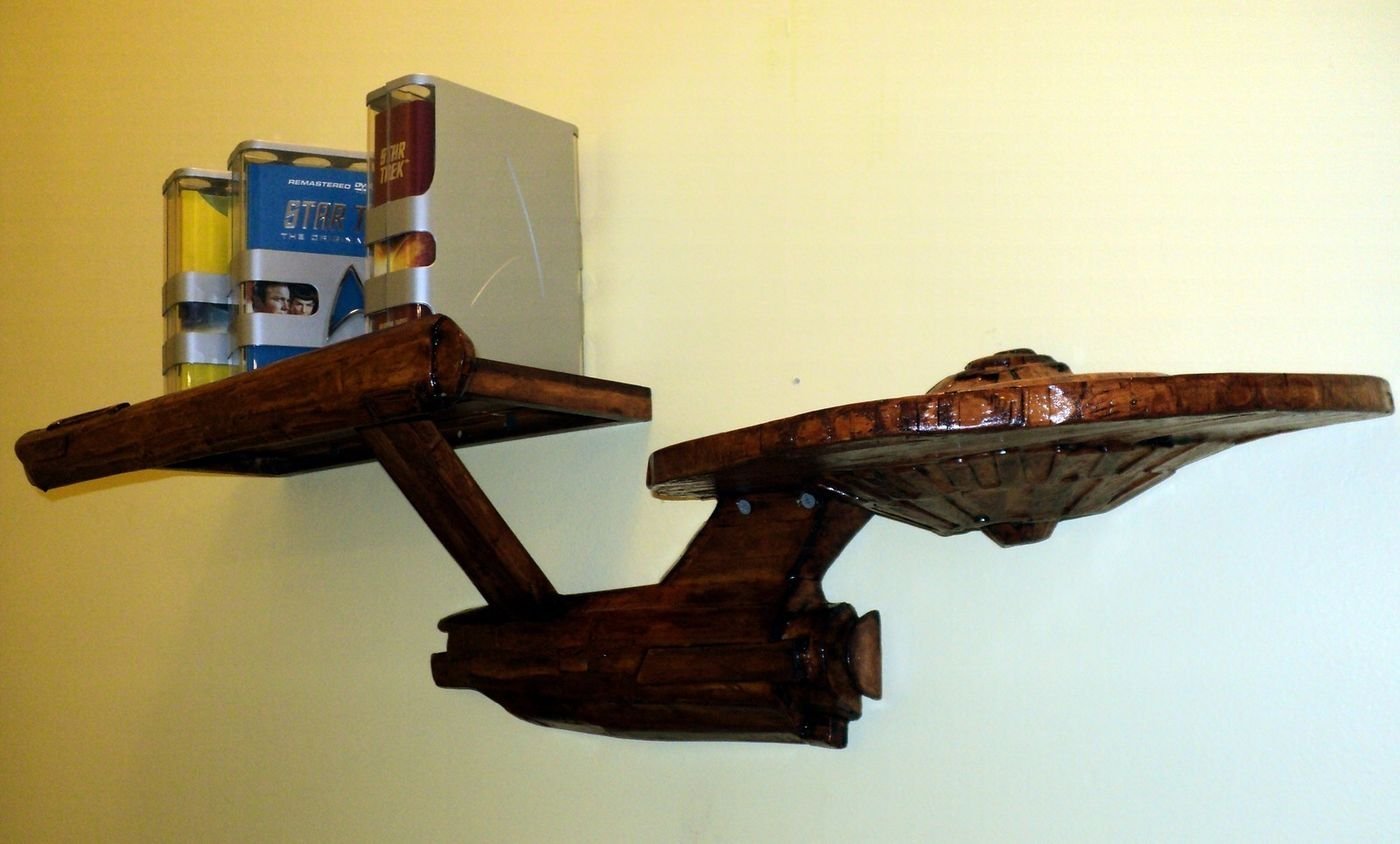 I used a white-out correction fluid pen, it's ok — it's a rollerball, to put on some official looking chip markings.

Position the pin legs into their slots on the lower part of the chip. The painting made them not fit into their slots so I had to trim one of the cross pieces to get it to seat flat.You can glue them in but they will be secured in place when the top part is glued on. Having them loose allows you some wiggle room when the pen holder is placed on an uneven surface. More so for the micro self-leveling of the pin legs since they are built to such fine tolerances. It's also fun that you can "tweak" the pins like on a real chip. Bend them too far and they will break off...

Use some dabs of hot glue or E6000 to glue everything together.

And for something even geekier, what I had in mind...

I have many demonstrator fountain pens like this LAMY Vista inked with LAMY Red and Jinhao 599A inked with Private Reserve Tropical Blue. The similar looking matter/anti-matter pair would make for some fine warp cores or nacelles on a desk stand version of this... Hmmm, Gotta go and move some stuff to make room for a few more bottles of ink...

Make your own geeky desk fountain pen holder. You don't need to be a geek or even have a desk. 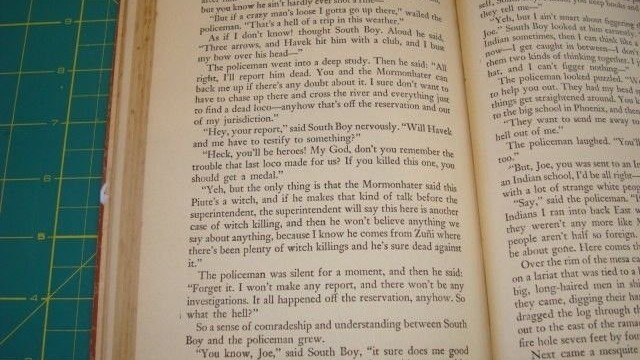 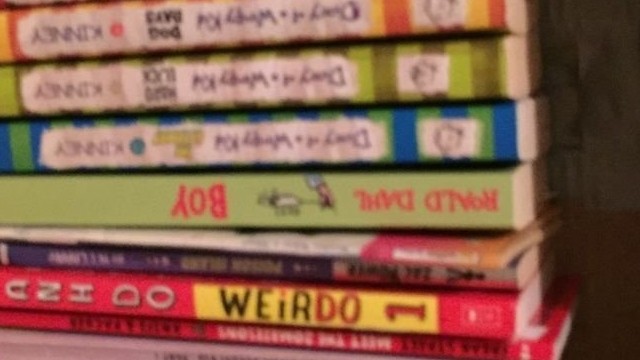 Books & Journals How to Make a Cardboard Bookcase
★ 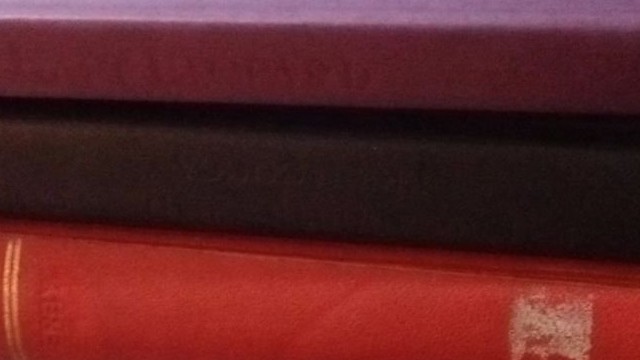 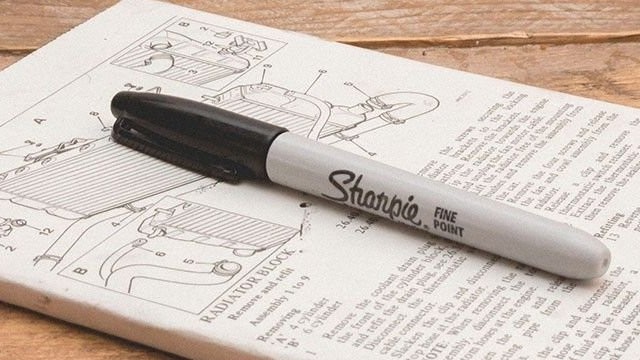 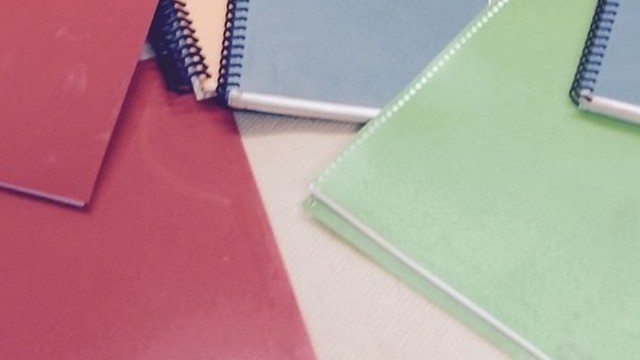 Books & Journals How to Make a Cardboard Bookcase
0