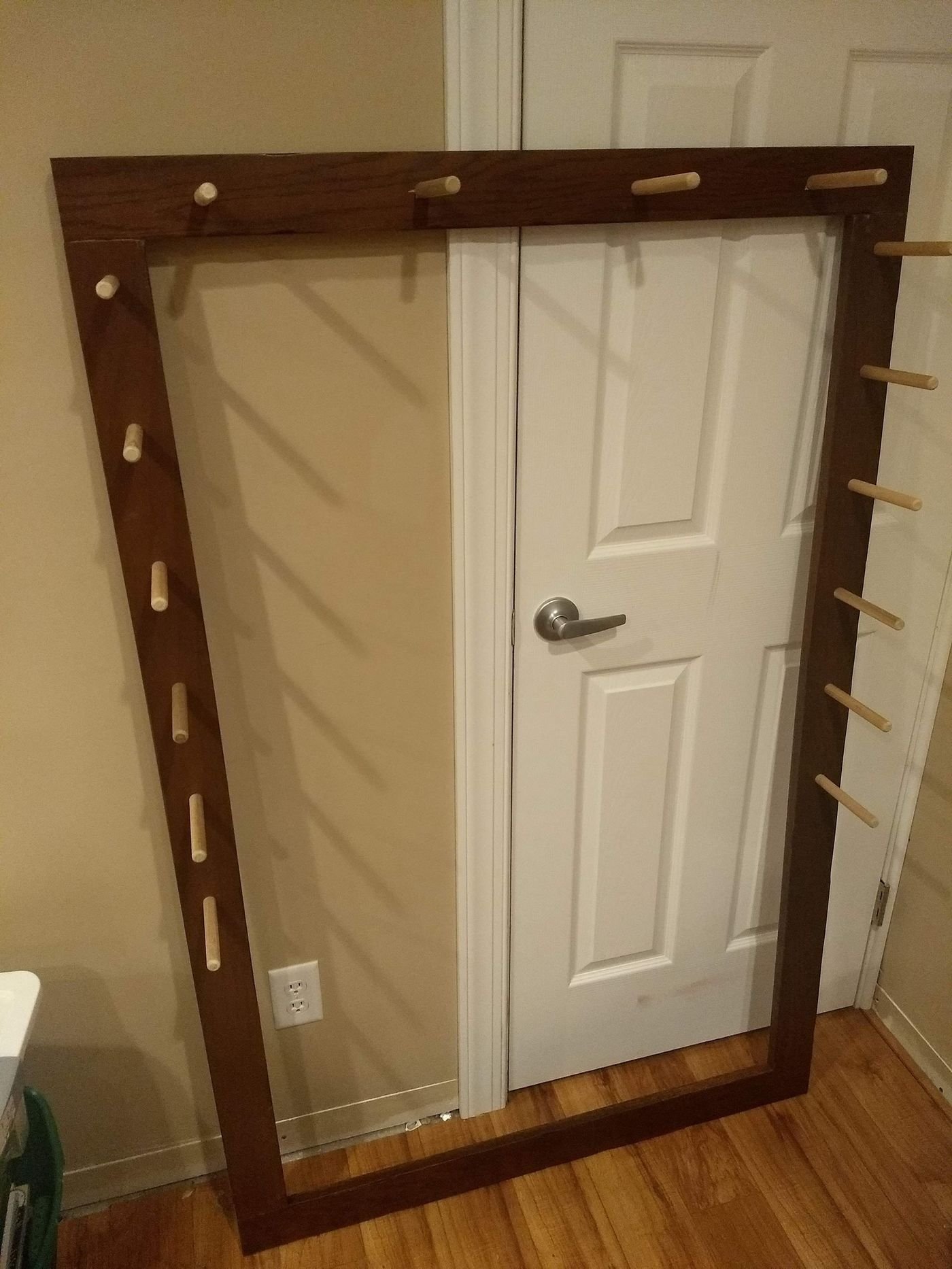 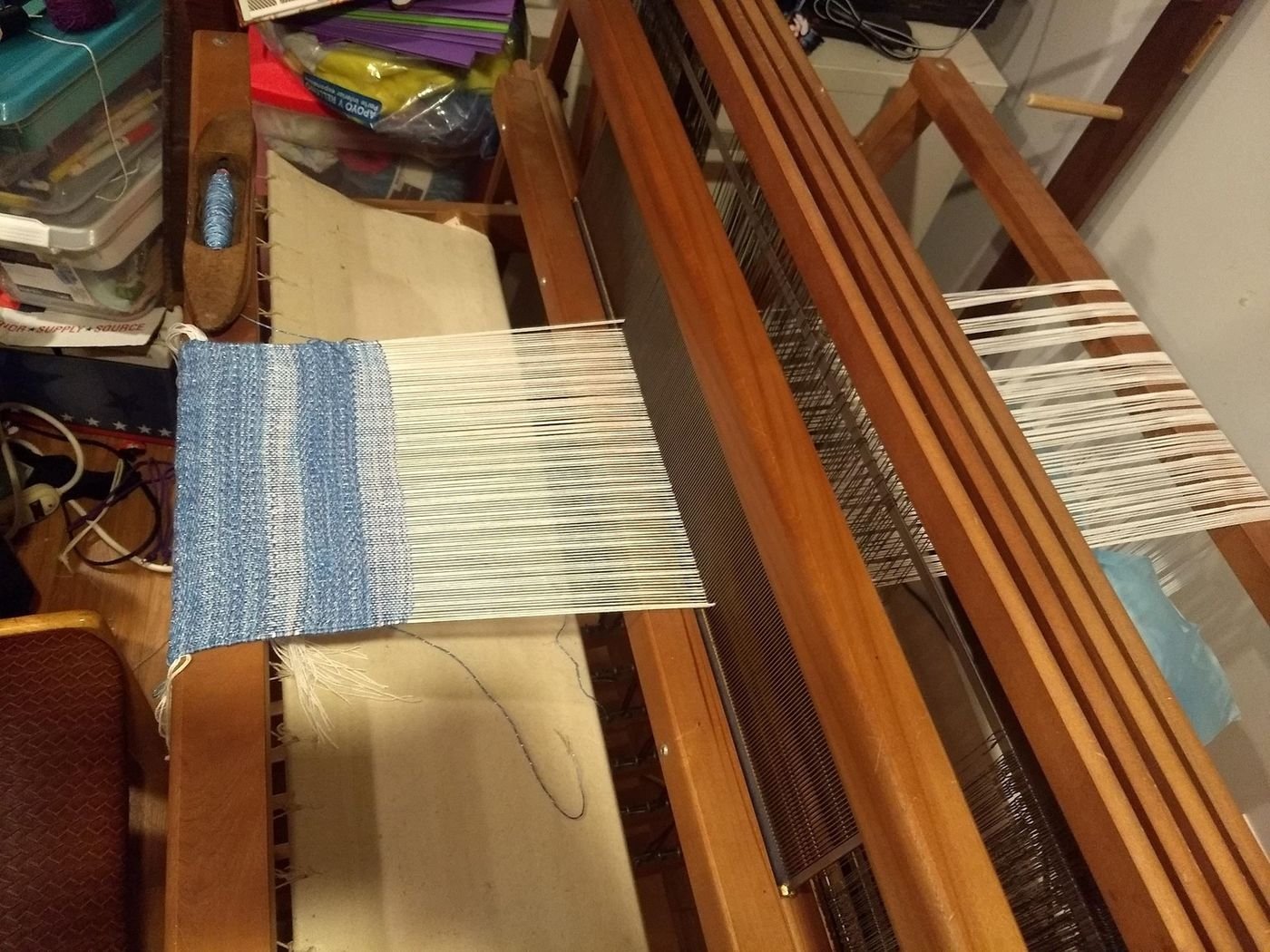 Got a loom? We inherited a 4-shaft Leclerc Artistat floor loom that my grandparents had used mostly for rag rugs starting back in the 60's or 70's.The first step in getting it ready to weave is winding a warp. This involves having many yards of 150 or so carefully organized parallel strands of yarn at consistent length, and it requires a warping board (or warping frame). The design for this warping board mainly comes from the description in this video from the inimitable Barbara Elkins at WEBS. Incidentally, even if you don't need to wind a warp for a loom I think her videos have such a calming effect you might want to watch it anyway!

For this warping board, I used some 3/4" x 3" (actual) oak boards salvaged from some old oak hotel headboards we'd gotten from our local Habitat ReStore. I'm still working on the main project we got them for (a sliding barn-style door) but these were some pieces we didn't need. They'll give a nice stable and strong frame for the warping board. 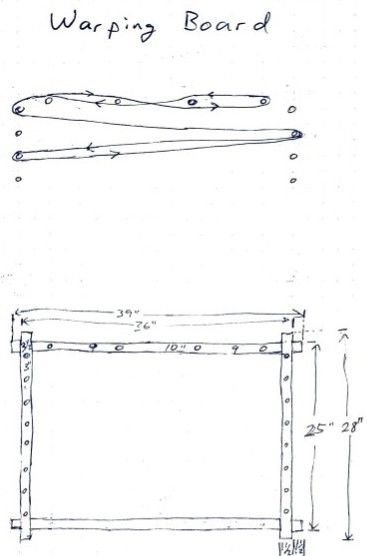 After watching the video about how to select and use a warping board, I did a little more exploring to figure out dimensions of the board I wanted to build. You might use a plan like the one drawn above, with a carriage bolt and wing nut at each corner securing the frame. I decided to use my pocket hole jig to make a flat frame instead. I also modified this plan by using the full length of two of the ~5' long oak boards I had so it will stand on the floor and place the top of the board a bit below my wife's eye level as she winds the warp. This allows it to be leaned up against whatever object or wall is handy rather than hanging it somewhere more permanently.

Figuring how to securely fix dowels perpendicular to the frame was more difficult. I decided on using a clamped plunge router as a makeshift drill press, and using screws as expanding wedges to clamp the pegs in place.

Also, since my wife's and my hands are bigger than Barbara's, we went with a 6" vertical spacing for the pegs going down the sides of the board. 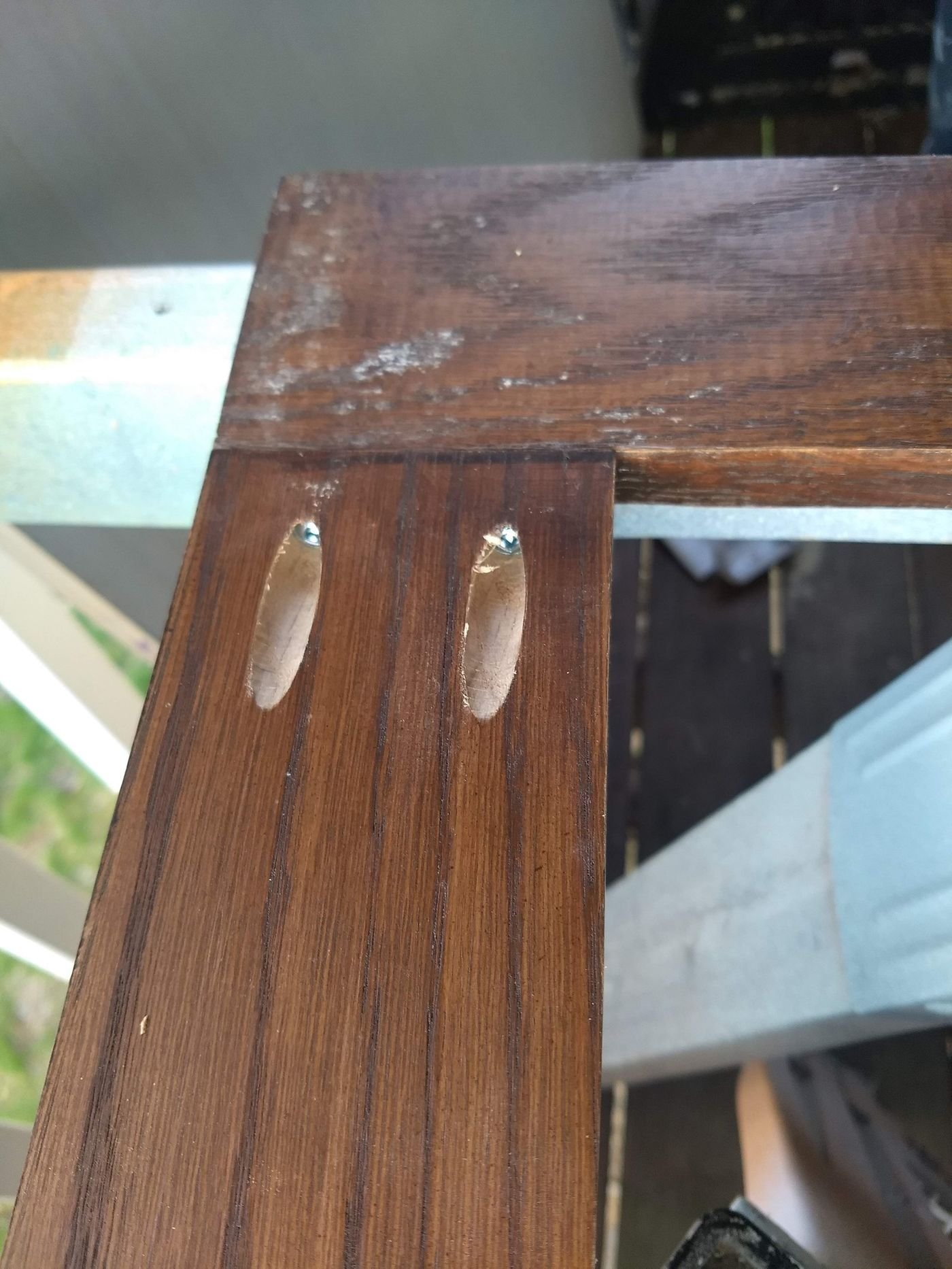 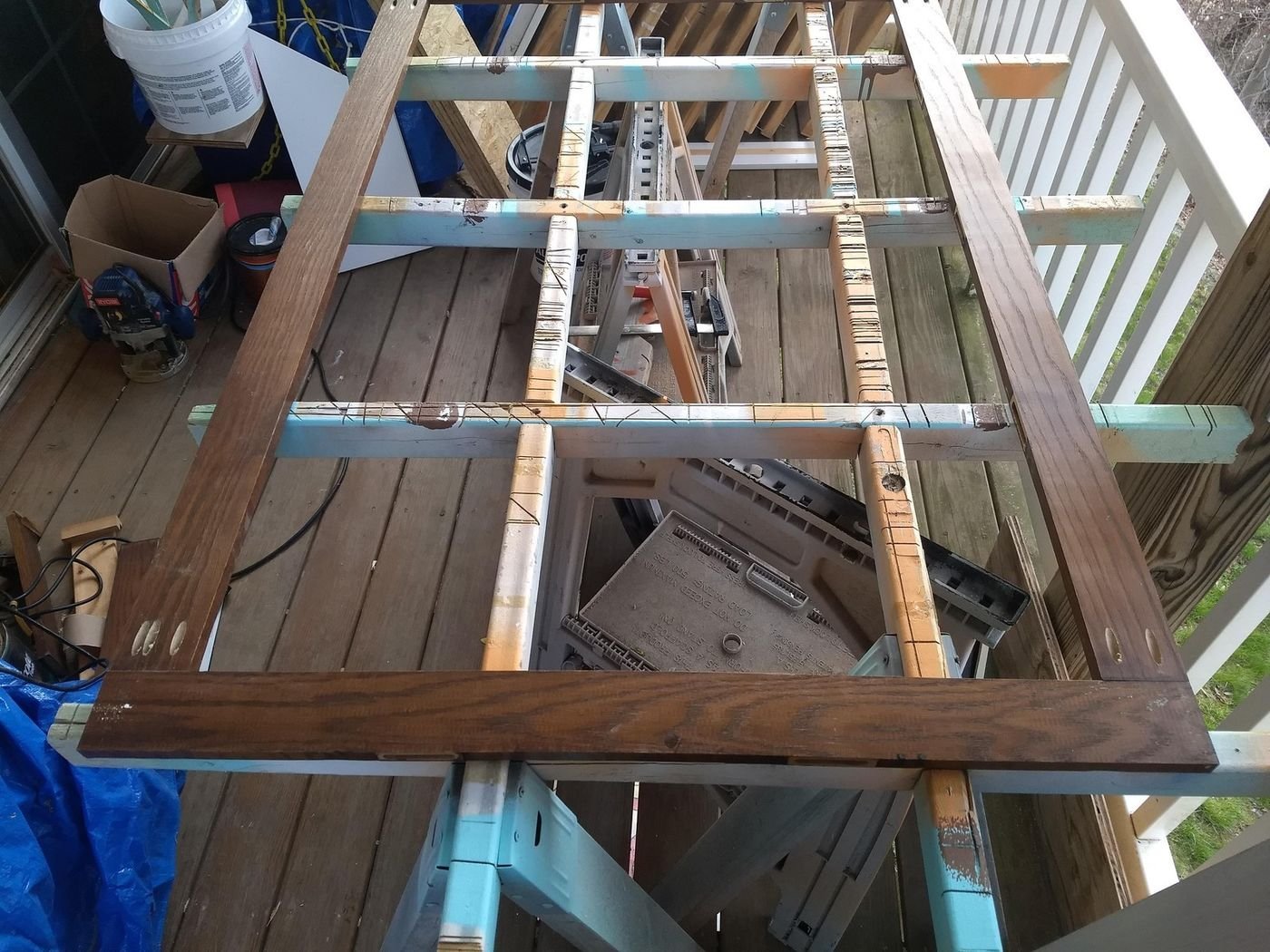 The oak boards had tenons on the ends from their previous use in head boards, so I trimmed those and cut two of the boards to 39" long. Two other boards were left full length minus tenons so the top of the frame is standing height while the bottom is on the floor.

I pre-drilled the pocket holes in the long boards, sanded the finish off of the 3" at the end of each short piece, and glued & screwed the corners of the frame. I checked the alignment with the carpenter's square, and all was well! 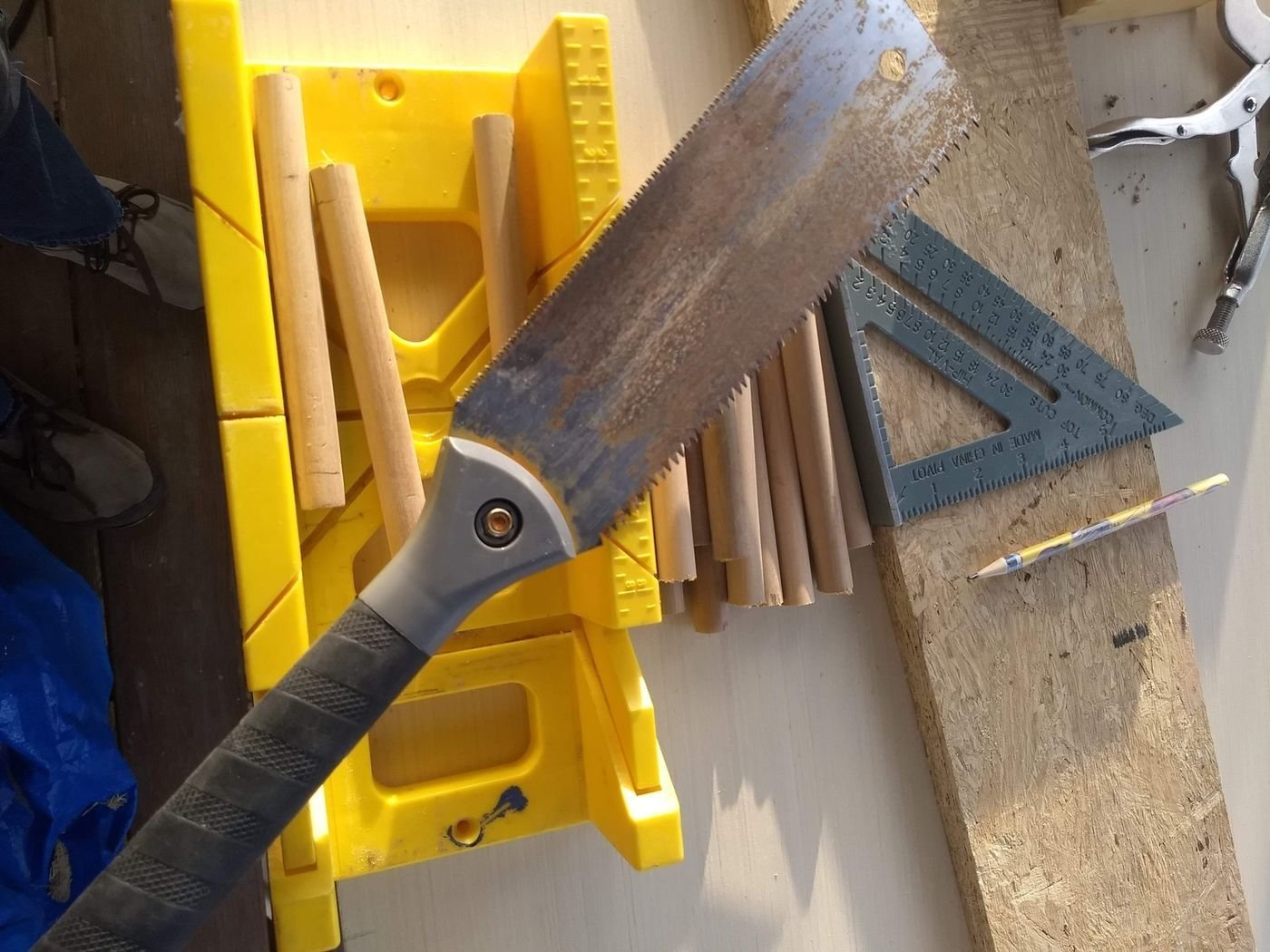 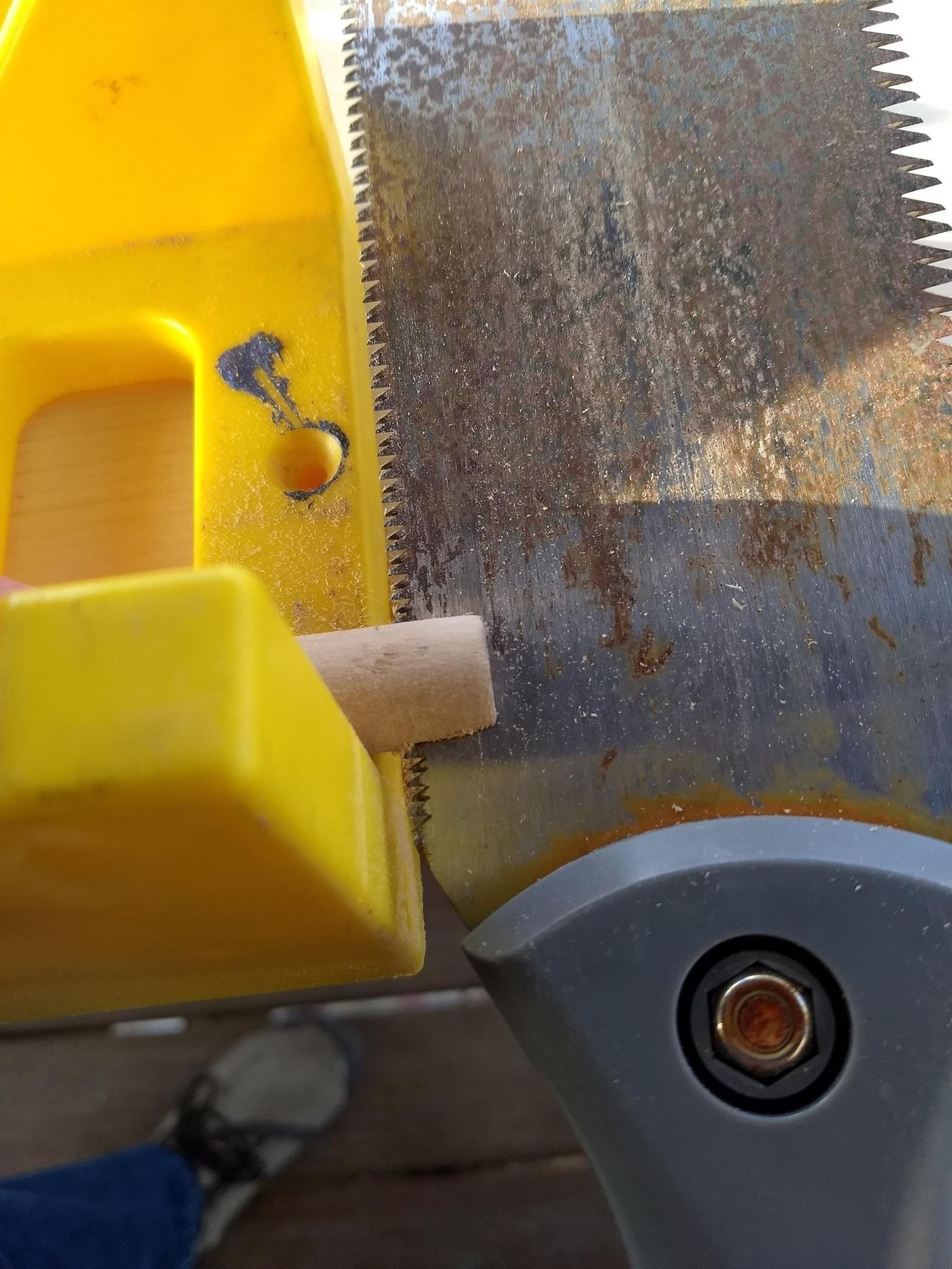 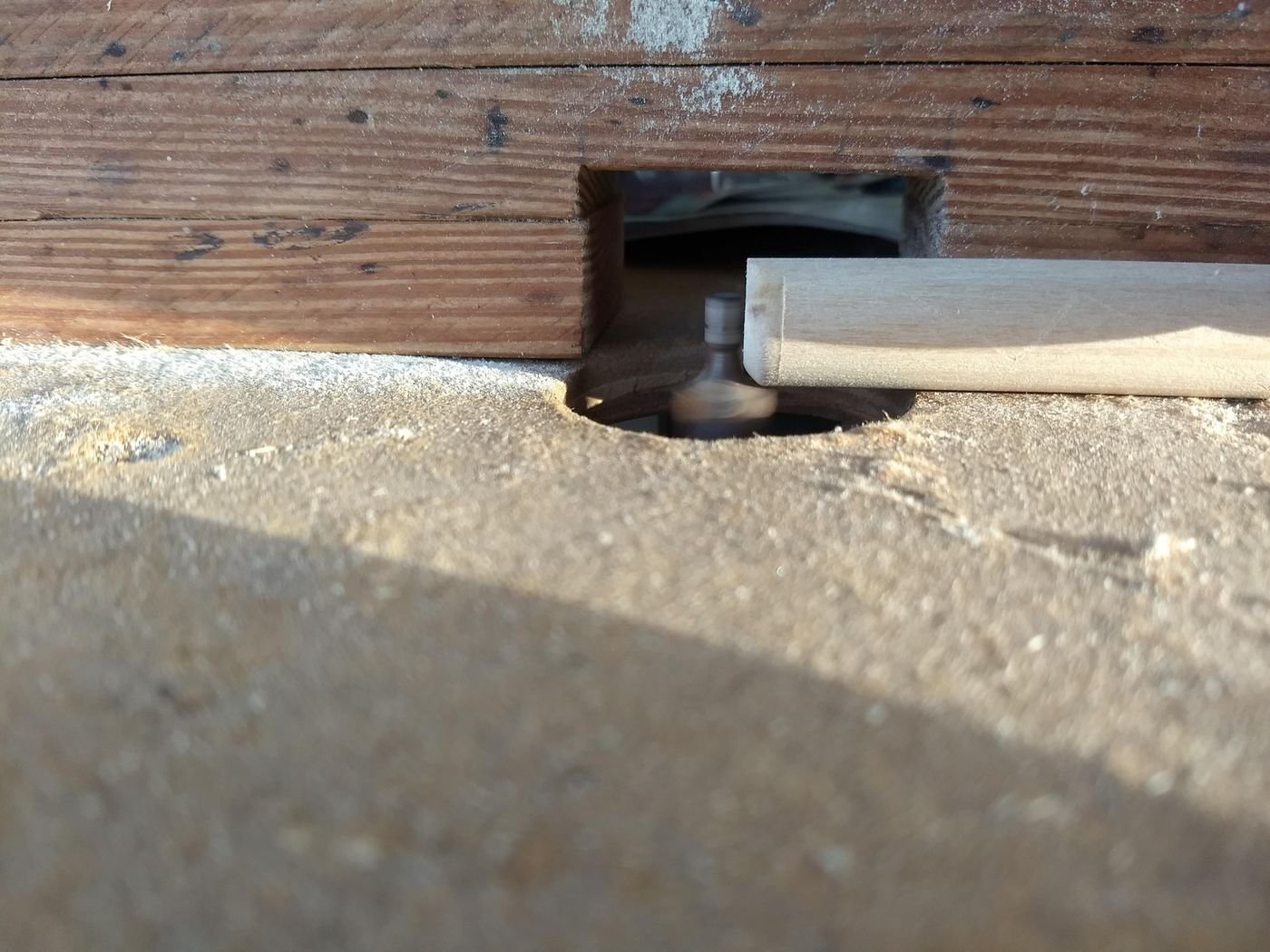 First, I sanded both 4' dowel rods with coarse ( 60 or 80 grit) and then fine (150 grit) sandpaper since it's easier to do the majority of the sanding at this point.

Then I cut the dowels to 6" lengths with the pull saw and miter box. While there, I made about a 1/2" cut with the pull saw into one end of each dowel so it looks a little like a Tinkertoy stick.This will be the expansion section to wedge into the holes later.

The other end of each dowel got a quick shaping with a roundover bit on the router table and did some final sanding to get them ready. At this point, the bare sanded wood is plenty smooth so I'm just using them as is. A little oil or rub-on poly stain at some point might be nice, but wasn't high on the priority list.

Bring It All Together! 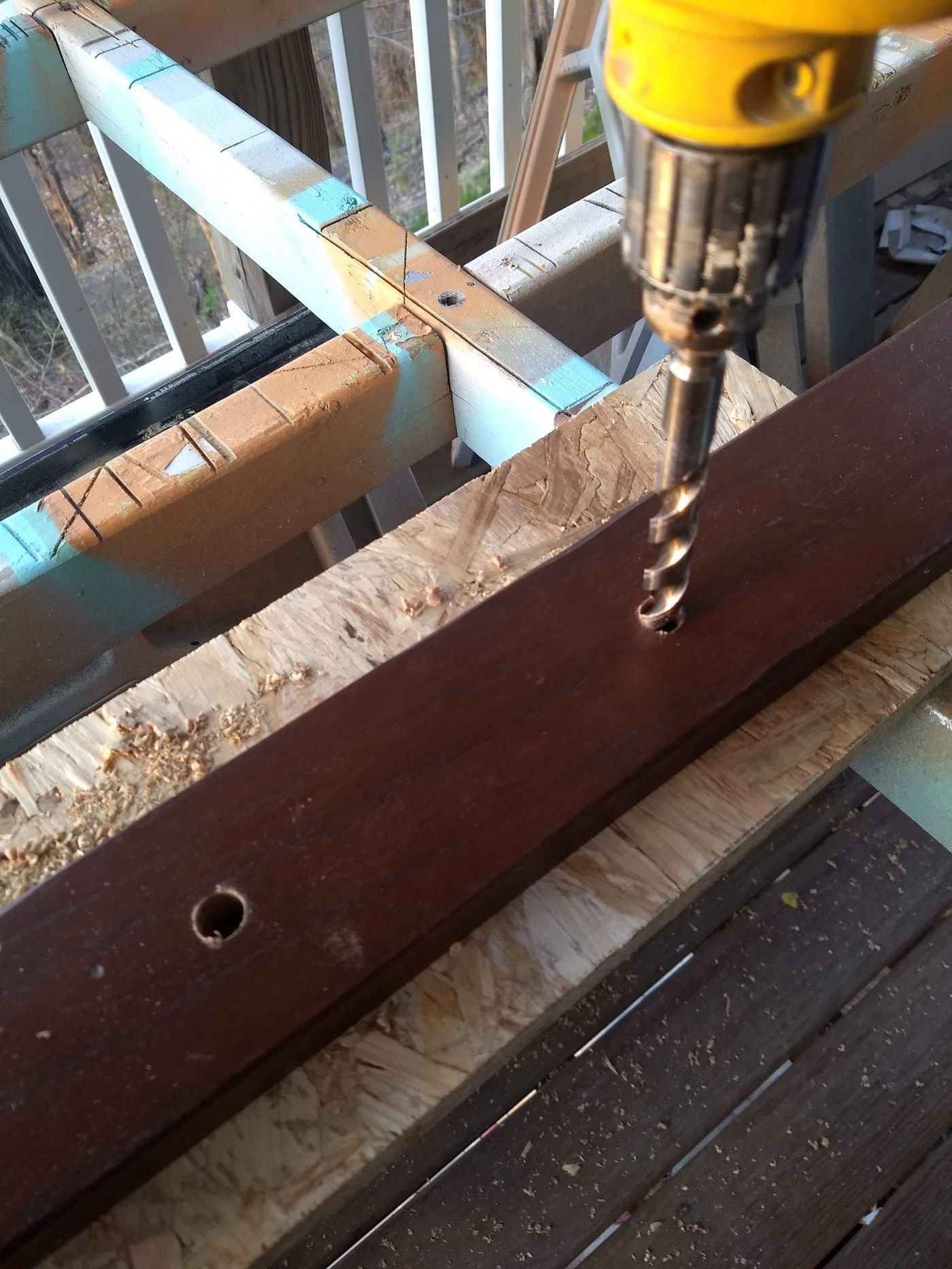 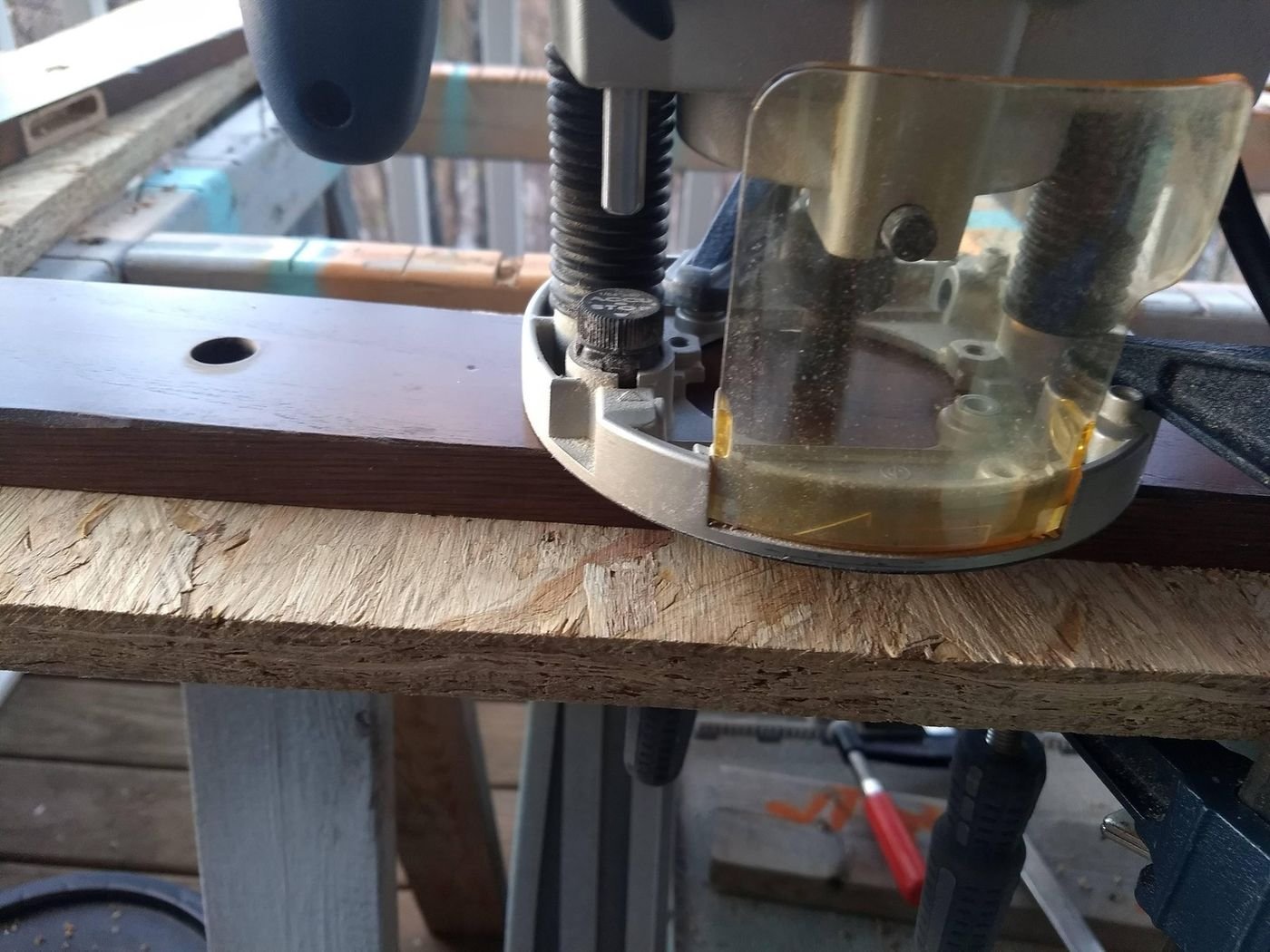 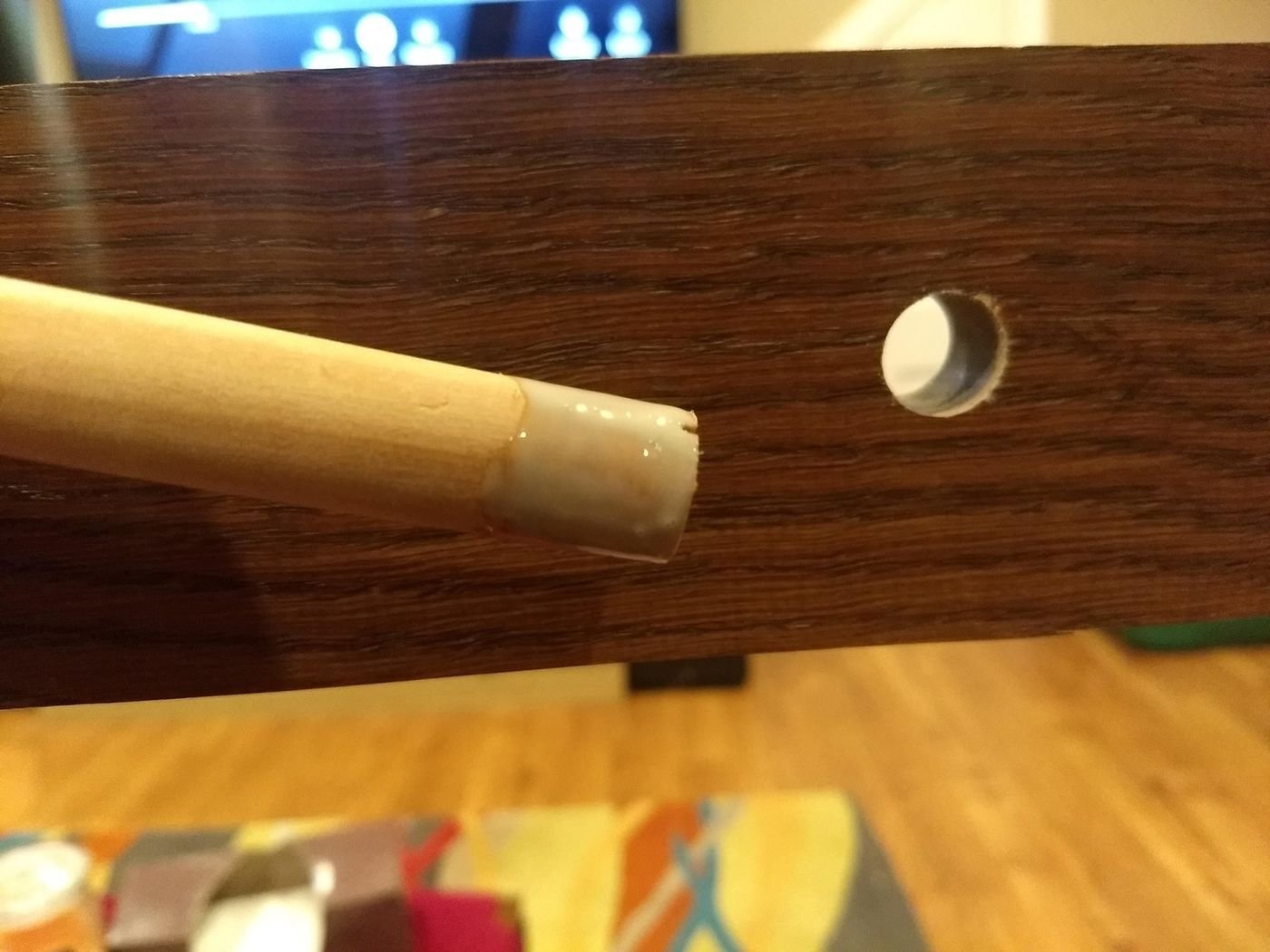 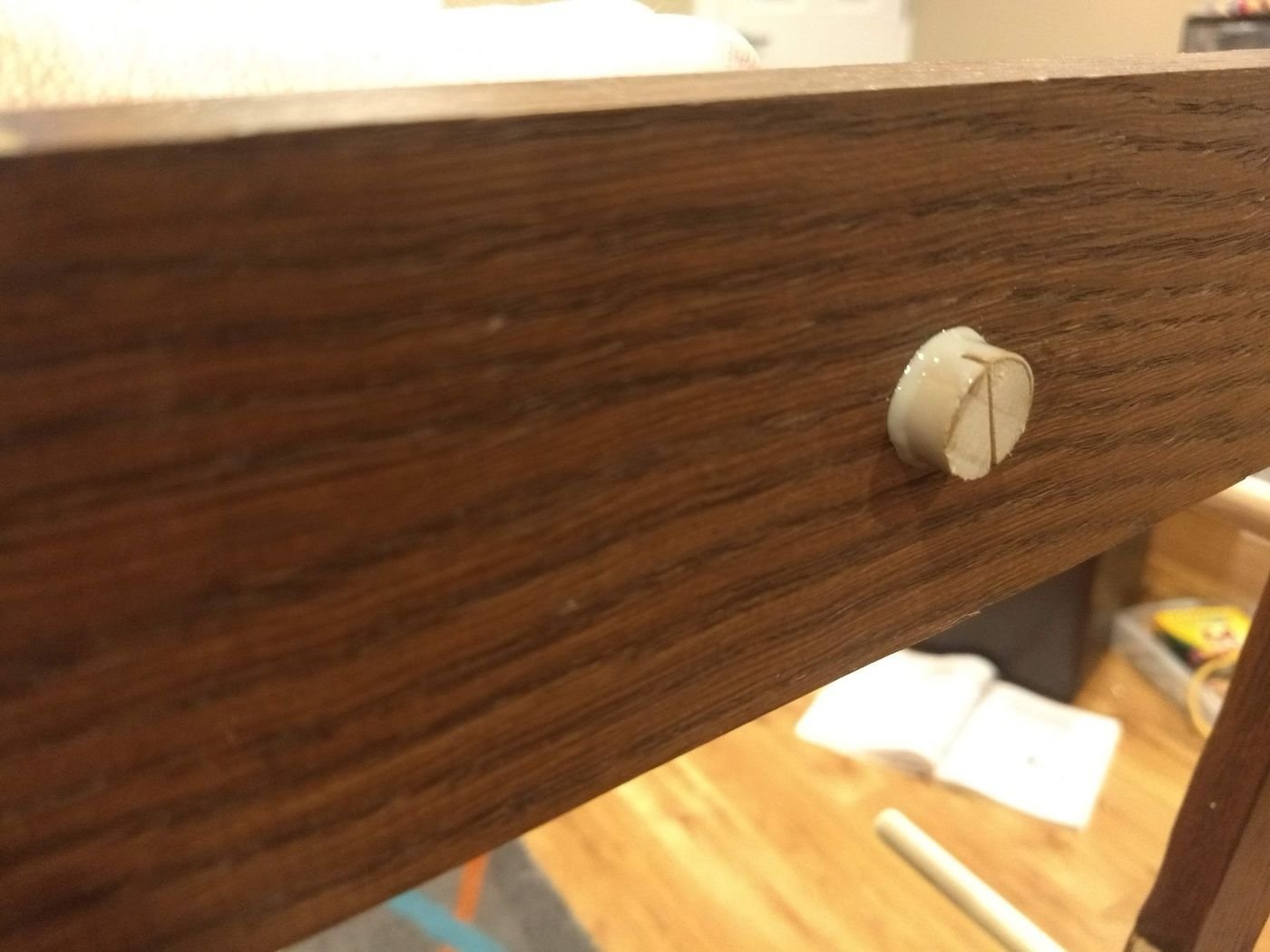 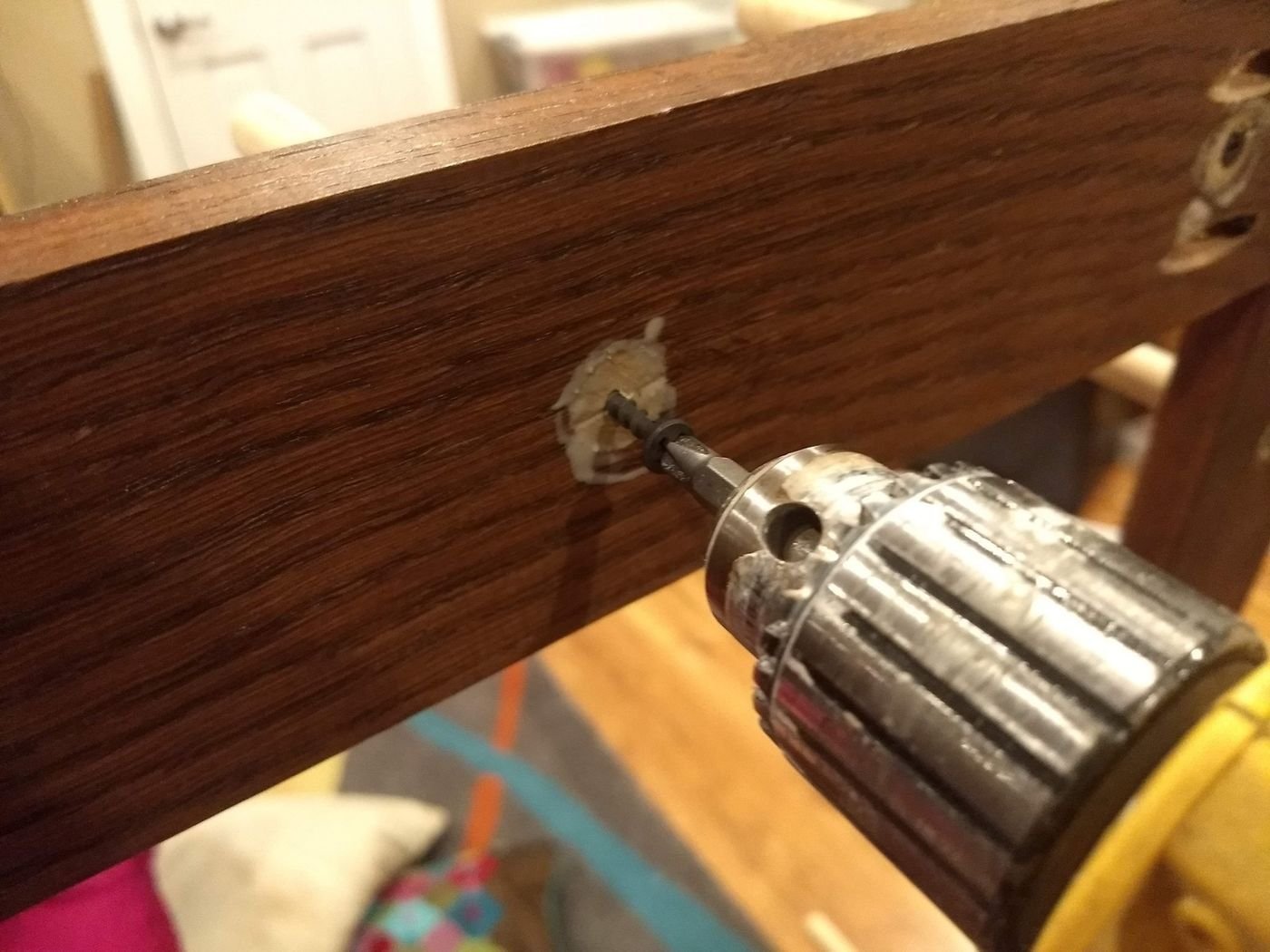 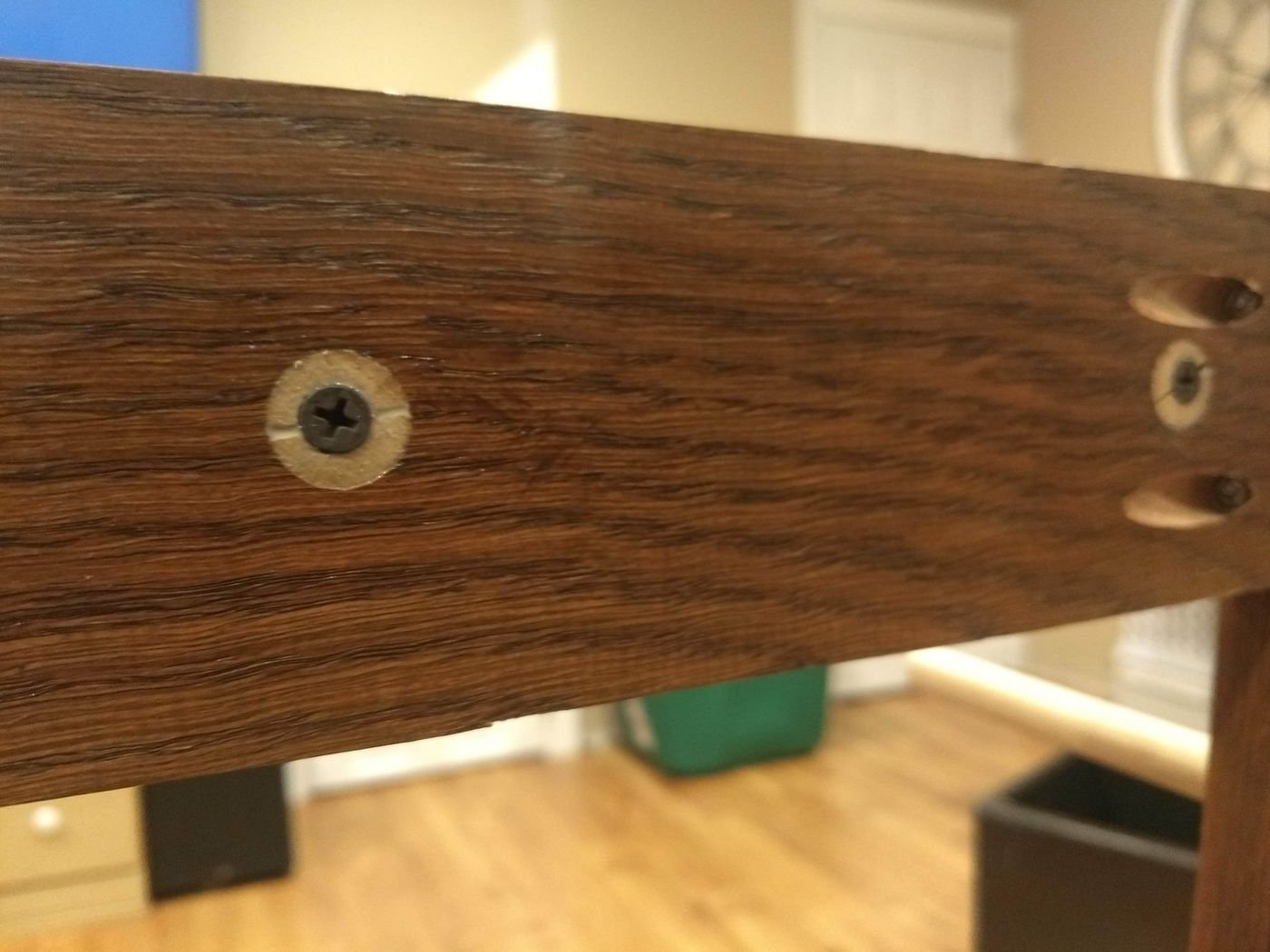 Now for some round holes for those round pegs.

I marked the locations for each dowel with the speed square and carpenter's ruler, centered along the frame boards. The top of the warping board only has 4 pegs: two in the center 10" apart, and two 9" outside of them. These are where you'll form the "cross" that keeps all the warp threads organized. The rest of the winding pegs were added every 6 inches down both sides of the frame until I ran out (6 on each side).

I don't have a 5/8" straight plunging router bit, so I first drilled a goodly sized hole at each dowel location (3/8" or so). Then, I clamped the router over each hole and used it to get a nice perpendicular plunge hole at 5/8".

The bottom 3/4" of each dowel (the Tinkertoy end) got glue I inserted it from the back of the board to avoid a gluey mess on the front. While holding the dowel in place with one hand, I drove a drywall screw into the split on the back which nicely expanded the dowel to grab tightly to the inside of the hole. Wipe off the excess, and it's ready to go! 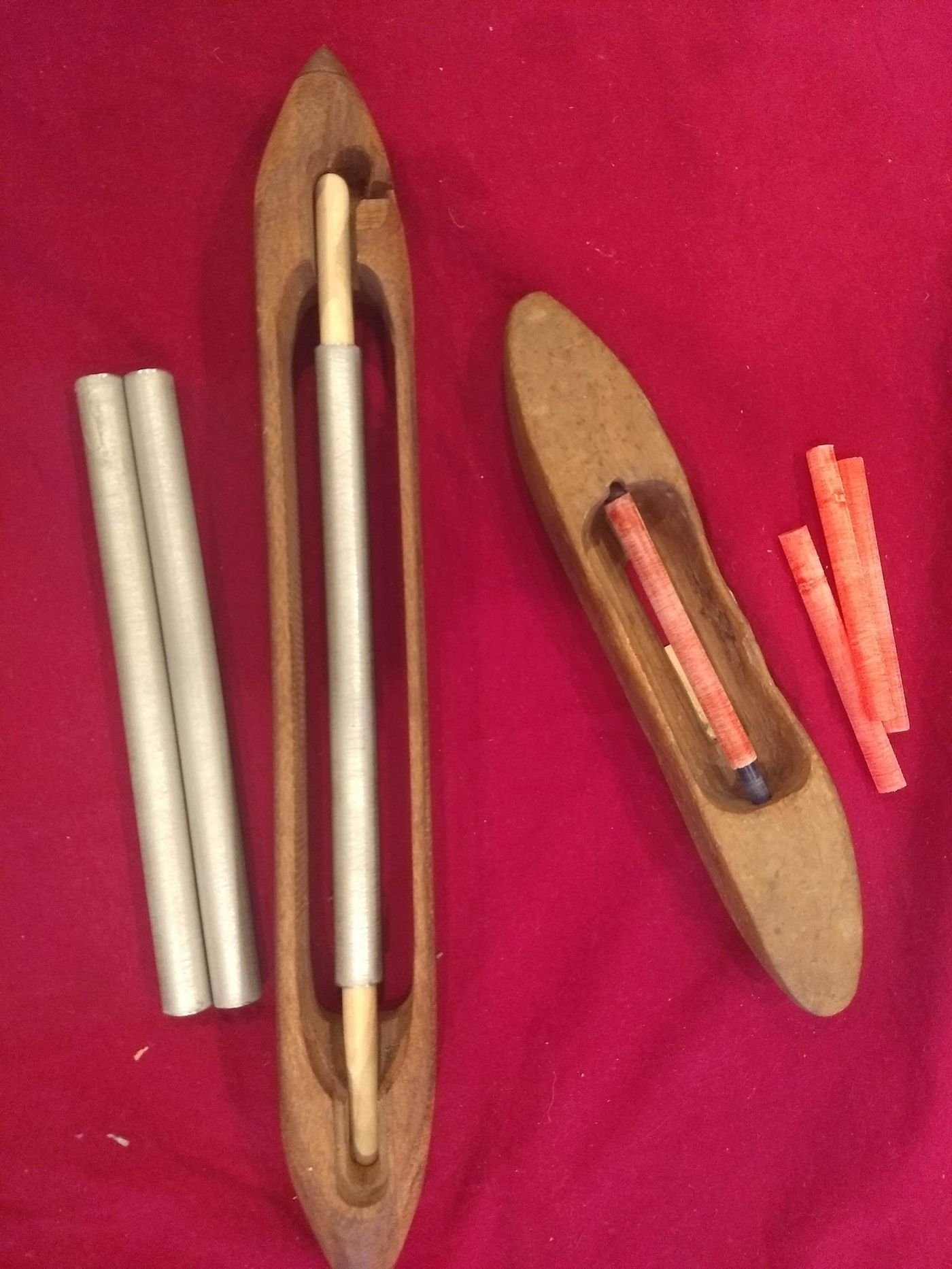 With the finished board and some more help from Barbara's video, my wife wound the warp in no time! The 6" dowels look like they will allow for winding about 12" worth of warp yarn at a time (this first try was with 11" at 12 ends per inch, 132 individual strands or "ends"). So, if we decide to use the full 24" of our current reed we'd need to wind and warp in 2 parts which I understand is pretty typical for this sort of thing.

Soon(ish) after winding ("dressing" a floor loom for the first time is a whole other adventure which Barbara can help with), she was weaving her first rows! There's a lot to weaving with these looms, but it's pretty great using and experimenting with a real heirloom piece of art machinery like this.

It's not really a separate 'ible, so I'll tack on how we were even able to revive an old (turn of the century-ish) handmade shuttle and a somewhat newer one with some more dowel shaping and sanding plus cutting up some appropriately sized tubes to make the axles and bobbins they needed. That old shuttle in particular is working like a charm, sliding very smoothly. (There's sanding, and then there's a century of being polished by handling and sliding between strands of yarn.) 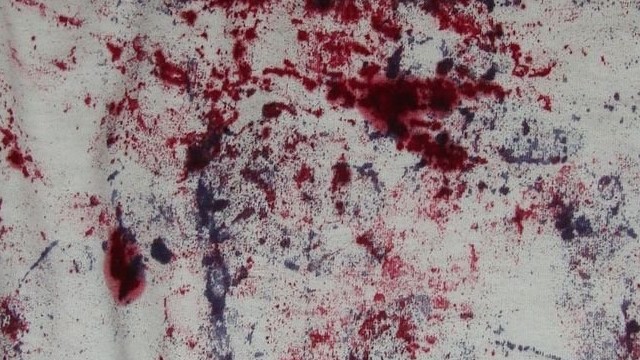 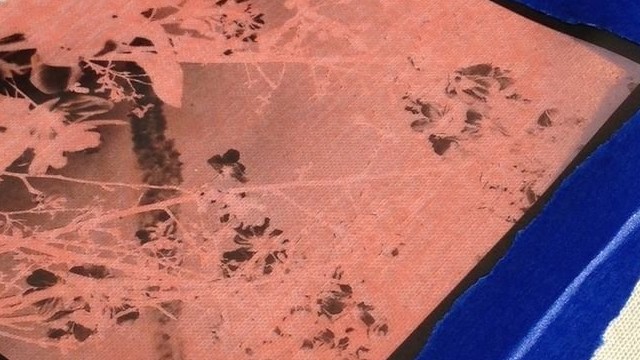 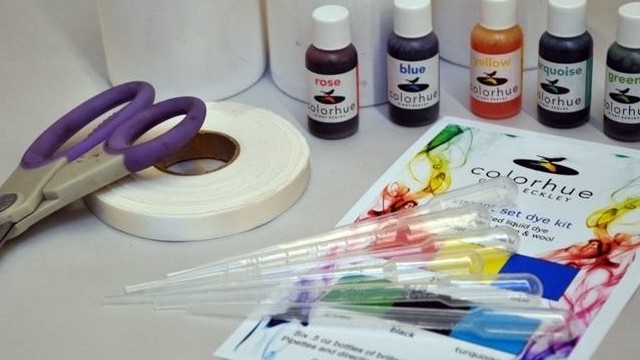 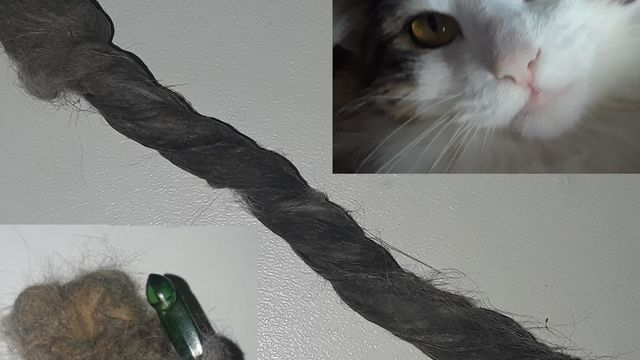 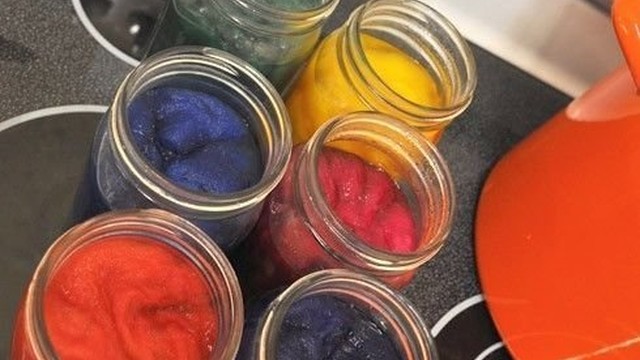 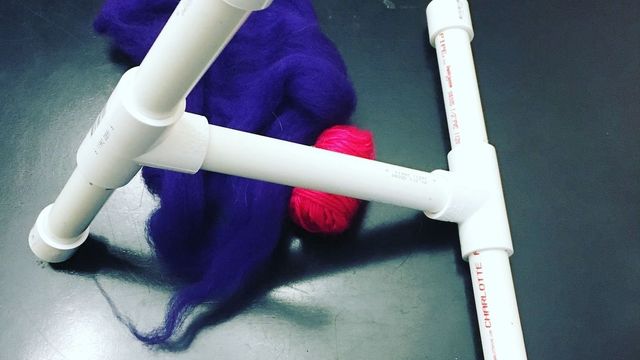