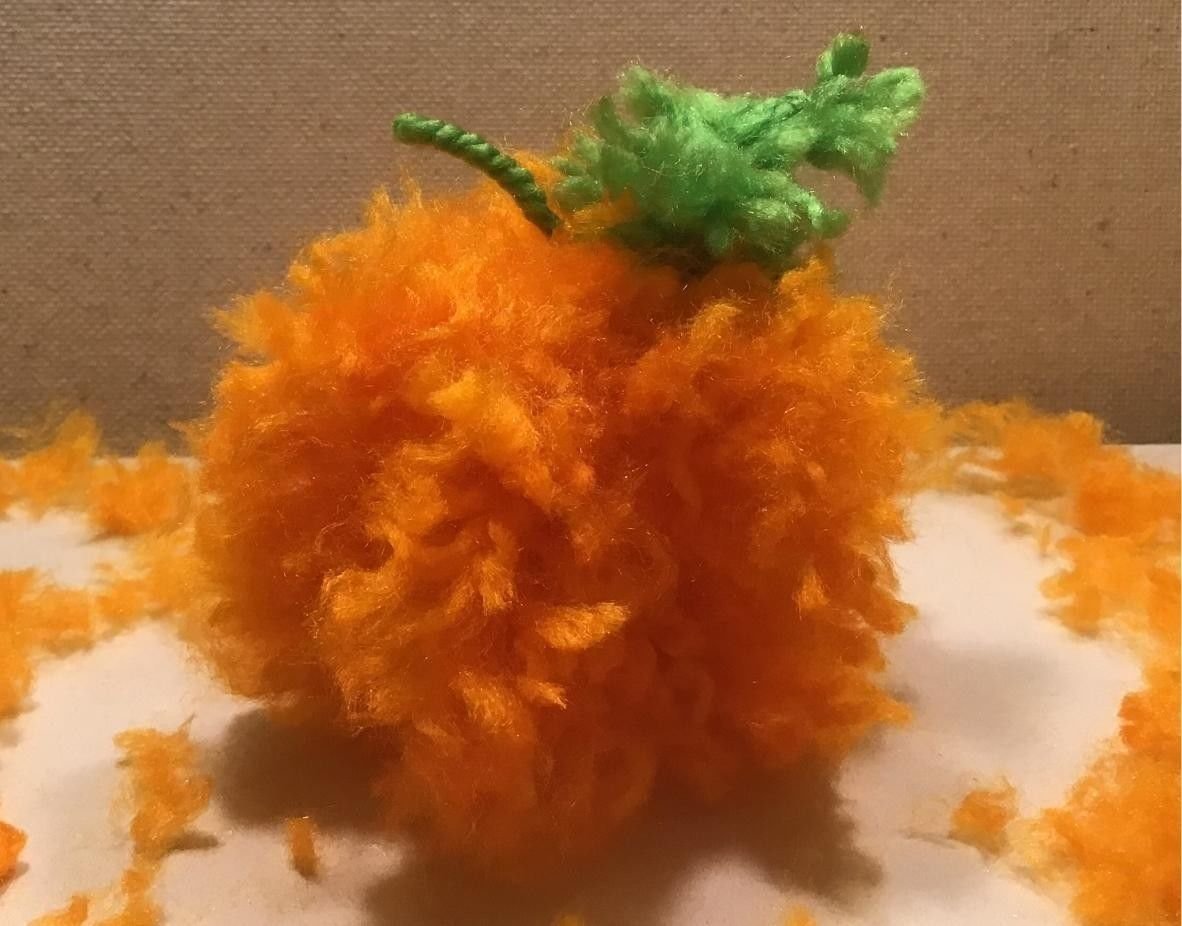 If you like pumpkins, then this craft is for you! This is the Pom Pom version of a classic orange pumpkin. I had much fun making it and what’s great about this craft was that you could switch up the yarn color or maybe cut it a little differently to make gourds, squashes, and you could probably do any other fruit if you just change up the supply’s, size, and where you cut your Pom Pom! This took me around 10 minutes to make, so its perfect if you are in a rush, and if you are bored, then make some more! 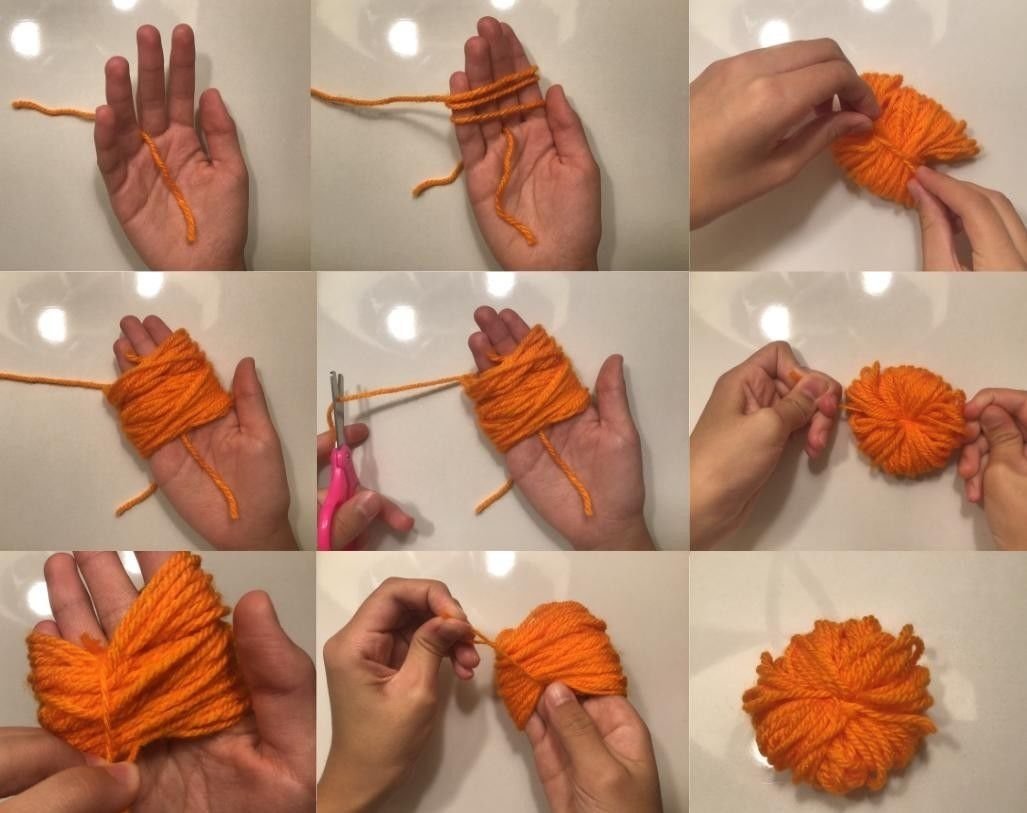 First, get your orange yarn and cut a small piece of your yarn, (around 12 cm long), and place it in between your middle and ring finger, then wrap the yarn around your hand, staring from the pointer finger and going all the way to your pinky. I wrapped mine around my fingers 50 times. If you want your Pom Pom to be fluffier, just wrap it around more times, and if you want it to be larger or smaller, just use less fingers or wrap it around a book, or phone. Once you are done wrapping it around, take that piece of yarn that you placed in between your fingers and bring them up together. Now start sliding your yarn off your fingers. Make a knot and flip the Pom Pom around also bringing the small piece of yarn over, knot that again and even more times for a stronger bind, the tighter the pompom is packed together will help later on in the process. Now, your Pom Pom is getting there, but the edges don’t look quite right, it’s now time to trim your Pom Pom. 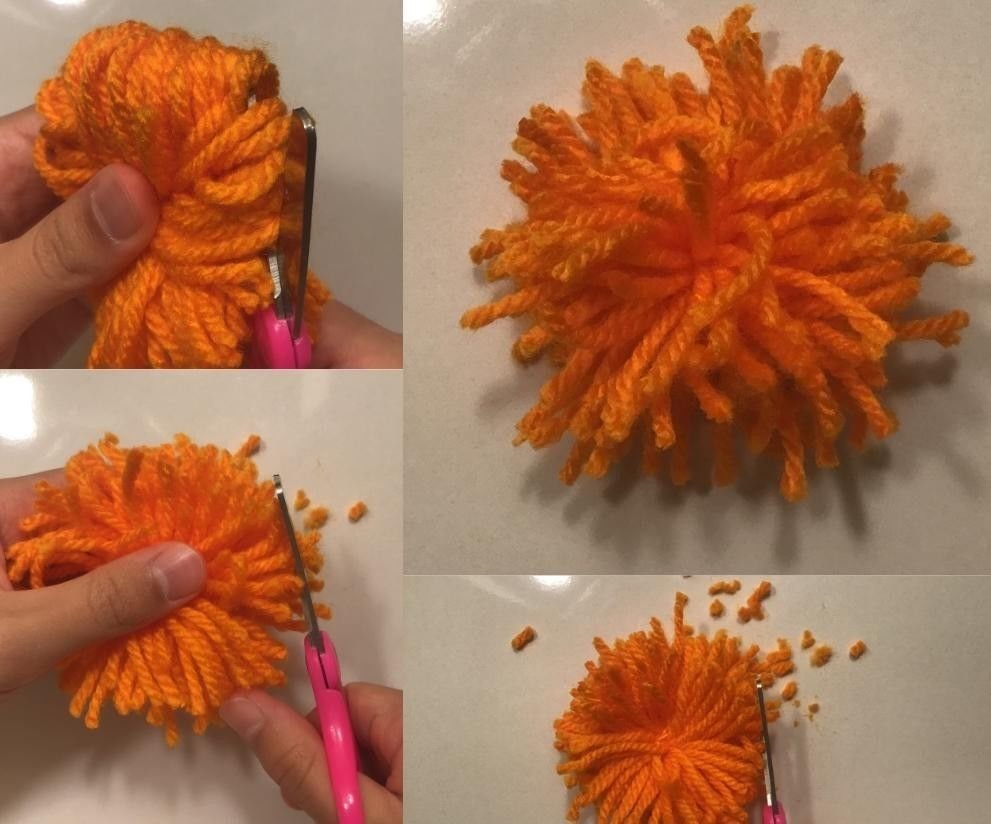 Now that you have the basic body made, it’s time to trim it. If you look at your Pom Pom, the yarn has made many loops and your Pom Pom isn’t looking right. Now, you can grab your scissors, insert one blade under a loop, and the other one over and cut the loop in half. Now you have 2 individual strands, repeat with all of the strands and instead of individually cutting every single loop, just cut a bunch at once, make sure that they are all aligned with the scissor, and then snip. Now that your Pom Pom has all of its loops cut, it may be looking a bit uneven and has hairs sticking all over the place, don’t worry, that’s normal. Just take your scissors and trim all of the extra hairs and unevenness off, your desk may look a bit like the floor of a barber shop, but just wipe all of the small yarn bits off your desk. Say you want to make your Pom Pom fluffy? Read step 3, if not, skip to step 4. 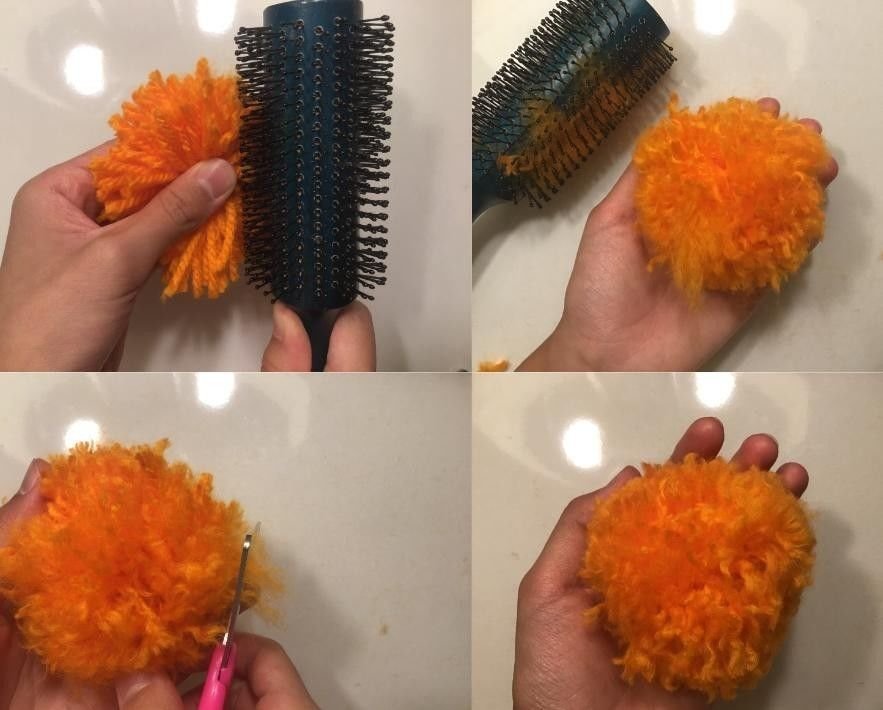 You may see most Pom poms are very fluffy and don’t have strange yarn strands coming from all directions. To imitate the store bought Pom Pom look, take a comb or brush, (I am using a hairbrush that I use only for crafting) and then brush your Pom Pom. Make sure to grip the center of your Pom Pom so that no yarn comes off when you brush. I suggest not trimming your Pom Pom before you brush it because brushing it will just make it uneven and have hairs sticking out, so if you want to save some time, just wait until after you brush your Pom Pom to trim it.

Making the Pumpkin Sections on Your Pom Pom 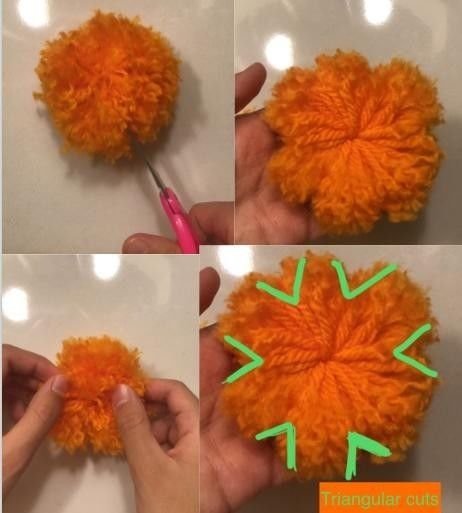 Many orange pumpkins have those little sections on them to make them look like mandarins or clementines. I tried to replicate those sections by cutting into my Pom Pom and separating the yarn into six equal sections, then I kept cutting and cutting. If you want to make the sections more prominent, cut triangle like cuts to make your indents more prominent. That last sentence may not make sense, but the picture above may help a bit more. From atop, your Pom Pom kid of looks like a flower or snowflake. Trim as little or as much, depending on what species or what type of pumpkin you want to make.

Making the Leaf and Stem 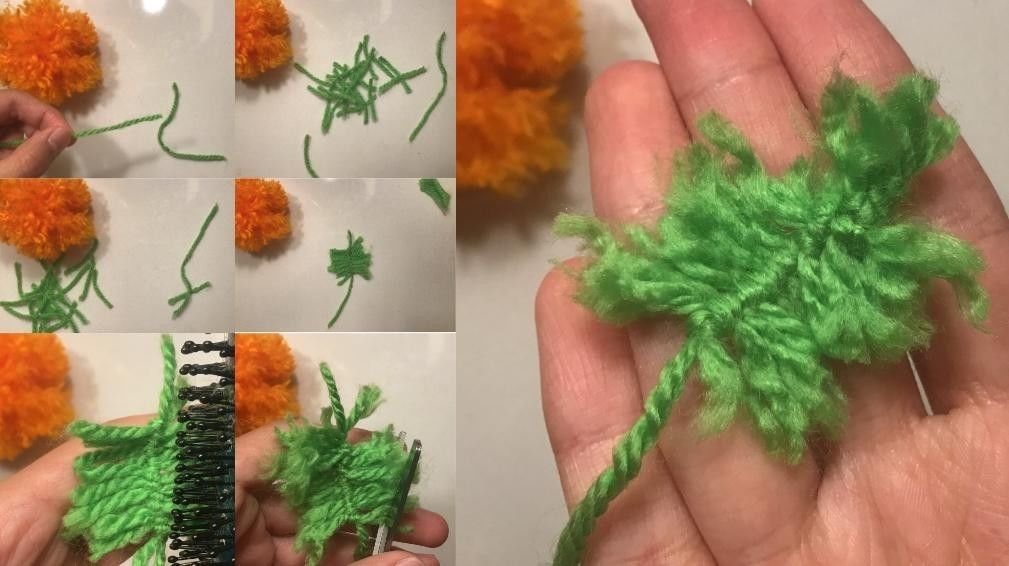 To make the leaf, I cut one long (around 12 cm) strand of yarn, and many small (around 3 cm) strands of yarn to make the leaf part. Just take the long strand and tie the shorter strands around the longer piece. It looks kind of like a feather or palm tree leaf. Once you have tied as much of the strands as you want to, take your scissors and cut your leaf into a leaf like shape (I fluffed out my leaf with the brush first, because I thought it looked a bit weird without fluffiness but you do whatever pleases you), you can just do a classic leaf shape, but I wanted to to look kind of like a pumpkin leaf some cut mine so that it had 5 little sections. Then with the long strand, you still have around 7-8 cm (depending how long you cut your strand) of yarn, so you can just twist that and make that little curly part of the pumpkin, then tie it onto one of the Pom Pom hairs on top of the pumpkin. The yarn I was using didn’t want to stay in the curly shape so I just let it be the stem of mine, if you want a real stem, then you could take brown yarn and tie some on the top or you can be creative and do something else.

Finishing Touches (You Are Basically Done!)

Your Pom Pom pumpkin is basically done! I took the time to make my sections more separated because tying the green stem and leaf on top messed it up a little, I just fluffed out the edges and then, it was done! You completed your Pom Pom pumpkin! Add a felt face to make it a jack o lantern, cut it out differently to make a squash, or add more leaves and a better stem to make it look realistic. This is your craft and feel free to customize it! Now enjoy your newly made, Pom Pom pumpkin! 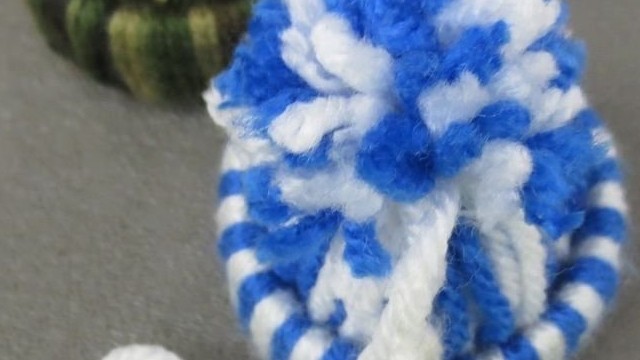 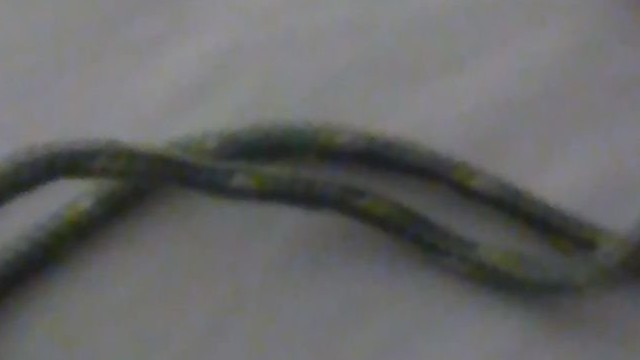 No-Sew Monkey Fist How To
★ 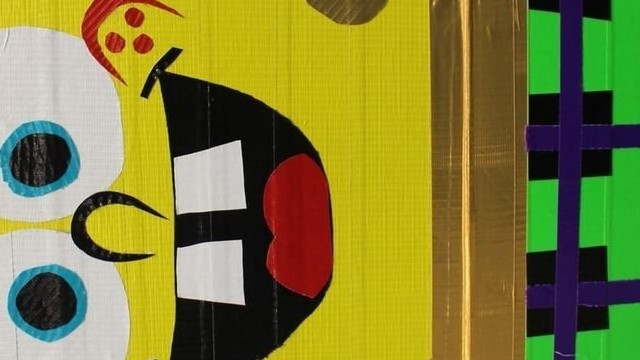 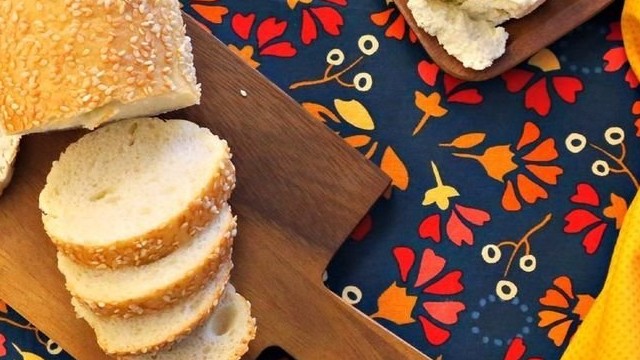 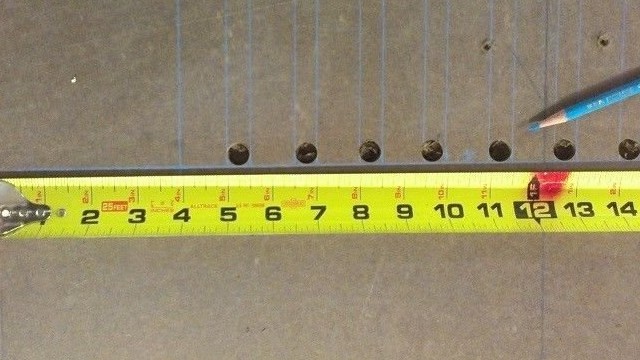 No-Sew Monkey Fist How To
0